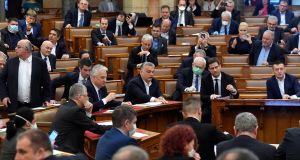 How should Europe respond to the imposition of indefinite rule in Hungary by the decree of its firebrand nationalist prime minister, Viktor Orban?

Critics see the move as nothing less than the end of democracy in a European Union member state. The European Parliament’s liberal group of MEPs have said it is “incompatible” with Hungary’s membership of the bloc.

But the response elsewhere has been muted. National governments are absorbed with fighting the coronavirus pandemic. Politicians are physically unable to meet. And an old split between east and west Europe remains.

Allies such as Poland – which has itself been reprimanded by the European Commission for stacking its judiciary with government allies – have blocked sanctions on Hungary in the past and can be counted on to defend Orban’s move as a rational emergency response to Covid-19.

Throughout the bloc, normal court and parliament proceedings are suspended, authorities have greater powers, and norms from the freedom of movement between EU countries to the ability of citizens to leave their homes have been extraordinarily curtailed.

An awareness of the risk of whataboutery may lie behind the decidedly muted reaction of the European Commission. President Ursula von der Leyen merely called for pandemic emergency measures to be “strictly proportionate”, without mentioning Hungary by name.

It wasn’t enough for the EU ombudsman.

“The latest events in Hungary are a serious concern for all Europeans. Democracy, the rule of law and freedom of speech remain vital,” said Emily O’Reilly, whose role is to hold EU institutions to account. “The [European] Commission must examine these events rigorously.”

There have been calls to put an Orban clause into the EU budget. No democracy or rule of law? No EU money.

But such measures could only be made jointly by national leaders in the European Council, where the east-west split lurks to scupper such sanctions once again.

Embarrassingly for Taoiseach Leo Varadkar, Orban’s Fidesz party sits in the same pan-European political group as Fine Gael in the European Parliament, the European People’s Party. Orban has in fact been quite a good friend to Ireland on Brexit.

His power grab is just the latest offence to provoke uproar in the EPP.

The group has been hamstrung by the same split as the European Council. Its eastern members halted a move to expel Fidesz last year, settling on the compromise of suspension. Western members feel humiliated by Orban’s continued nonchalant flouting of treasured European norms.

Political clout is an issue. EPP’s more centrist members, such as Fine Gael, have been punished in recent elections, while their more hardline cousins in the east are thriving. Breaking up the band would also risk the EPP’s dominance as the largest grouping in the European Parliament, which grants it extra power in matters such as appointments to the commission.

The row is now playing out internally in a flurry of conference calls and letters. After EPP president Donald Tusk called national representatives to co-ordinate the group’s response, Orban denounced him in letters to EPP political leaders.

“I find it worrying that the president of our political community, Donald Tusk, uses the EPP as a playground for his Polish domestic political games,” Orban wrote – a reference to Tusk’s opposition to the Law and Justice party, which was behind the Polish judicial power grabs.

“I ask you to urge and persuade President Tusk to stop sowing the seeds of division in our political family.”

Tusk responded with a letter of his own, warning a second attempt at expulsion looms.

“Many of you, even if you criticised PM Orban for his previous decisions, did not agree to expel Fidesz,” Tusk wrote to the leaders. “But the time will soon come when you will have to again reconsider your positions.”