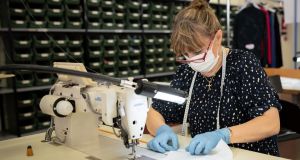 After 73 years making women’s fashion, the family-owned Miroglio company of northern Italy has a new item on its production line: face masks.

Where once skirts and tailored tops issued from its sewing machines, hundreds of Miroglio workers are now stitching together the facial coverings after being asked by the regional government of Piedmont to produce them to help overcome a severe shortage of protective equipment needed to curb the spread of the coronavirus pandemic.

“Making masks has helped us strengthen morale and stamina of our people,” chief executive Alberto Racca told The Irish Times, adding that some workers had lost family members to the virus.

“We feel like part of something bigger, like we’re making a small but positive difference to the world around us.”

The masks, which can be washed and re-used, are not approved for use in hospital settings, but are in high demand for ancilliary service personnel from ambulance drivers, to police responders, to carers, to those working in homes for the elderly, who due to the extreme equipment shortages would otherwise go without.

It comes as an increasing number of European countries mandate compulsory public wearing of masks, in a shift away from the advice of the World Health Organisation, as some experts advise that even homemade masks are better than nothing.

The WHO advises that masks help prevent the spread of the virus from the wearer to others, as it is a barrier to droplets from the mouth and nose.

Nevertheless, it says the public should not try to procure masks to wear them because there simply aren’t enough, and they should be preserved for people with symptoms and those caring for them.

The wearing of masks to avoid spreading illness to others is near-universal in many Asian countries, including those most successful in curbing the spread of the virus, such as Taiwan, South Korea, and Hong Kong.

Austria on Monday became the latest European country to make wearing masks in public compulsory, following Slovakia, the Czech Republic and Bosnia-Herzegovina. Millions of free, non-medical-grade masks are to be distributed at the entrances to Austrian supermarkets. The German health ministry has also said it it is considering advising the public to wear facemasks to slow the spread of the virus.

After being approached by the Piedmont regional government to produce masks, Miroglio’s designers developed a prototype made by by treating a cotton and elastane fabric mix with a waterproof coat.

It was tested and approved by the Piedmont coronavirus crisis response centre for use in non-medical settings, and the company has since supplied 600,000 to authorities, funded by donations including by the company owners. The masks can also be bought for €3.50.

It’s not the only example of innovation under pressure in the crisis. The engineering startup Isinnova of Brescia, one of the hardest-hit areas of Italy, began printing 3D venturi valves needed for ventilators to treat coronavirus patients, after a local hospital ran out.

“The situation here is very serious because we have a high number of deaths, and they are going up every day,” said company founder Cristian Fracassi.

The team went on to figure out how to transform commonly-available snorkelling equipment into ventilator masks, for use in extremis when medically-certified equipment has run out. The company has released its design online, and producers with 3D printers in 59 countries from the United States to Uruguay have signed up to be contacted by hospitals who request orders. So far, 500 devices have been delivered.

“It shows the value of having the know-how and the control of the whole supply chain,” Mr Racca said. “It’s a positive spillover of our industrial heritage.”