Usit travel group in liquidation due to coronavirus crisis

More than 100 jobs lost as language school goes under as well; Outcome for customers ‘uncertain’ 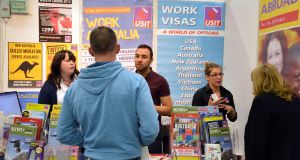 Kinlay Group, the parent company of Usit travel agency, has gone out of business due to a “tsunami” of effects spurred by the coronavirus crusis .

Provisional liquidators were appointed by the High Court on Friday to four companies in the travel group, employing 149 people.

The move affects student-focused travel outfit Usit and The English Studio, a language school with operations in Dublin and London, which have all ceased trading. Usit employed 76 staff at offices in Dublin, Galway, Limerick and Cork. The language school, which shut two weeks ago under the Government’s coronavirus restrictions, employed 31 staff in Ireland.

The company said that the outcome for customers who had already booked travel with Usit is “uncertain”.

Severe restrictions on international travel as a result of the pandemic has lead to cancellations of many spring and summer travel bookings and tours for students and school groups and an immediate collapse of new bookings, Rossa Fanning SC, for the companies, outlined on Friday. He said this caused a cash-flow crisis leaving the companies insolvent and unable to pay their debts as they fall due.

The companies had received booking deposits and pre-payments from a large number of customers with some €1.2m owed to pre-booking creditors, including some 3,000 students who paid deposits of €299 or higher for intended travel to the US this summer.

Usit Ireland Ltd is a bonded travel agent and that may allow for refunds of deposits, he said. Travel insurance or credit card companies may provide “an alternative route” for refunds.

Ms Fanning said, as a result of cancellations and lack of new income over the coming months, the companies lack the financial resources to continue trading through to October 2020 and cannot raise the necessary €3.3m funds .

There was also debt to Ulster Bank of €1.7m and the directors had decided there was no option but to wind-up the four companies and petition for the appointment of joint provisional liquidators.

This was entirely a result of the “catastrophic” impact on international travel of the Covid-19 pandemic, the court heard. Up until a few weeks ago, all but one of the companies have been largely profitable and there was no issue about the management of the businesses, the court was told.

Usit Ireland had forecast it would generate earnings of some €700,000 in the financial year ending October 2020 and until a number of weeks ago, its business was on track to achieve this forecast, he said. Bookings for the US summer work and travel programme were well up on 2019 and bookings for travel to Australia and Canada were performing better than 2019.

This position “suddenly and dramatically changed” with the emergence of the coronavirus pandemic across Europe and the US in February and March.

The directors very much regretted making this application but it was “beyond their control”. The company was unable to ensure employees would be paid to the end of March, he added.

Mr Justice Mark Sanfey granted orders on Friday evening to Mr Fanning,, for the appointment of Kieran Wallace and Andrew O’Leary of KPMG as provisional liquidators to the four companies, with addresses at Aston Quay, O’Connell Bridge, Dublin.

Usit Ireland specialises in US summer work and related travel programmes; School and Group Tours Ltd is involved in organising school tours to European destinations and DCBS operates a school at Abbey Street, Dublin 1, trading as the English Studio Dublin, teaching English as a foreign language. DCBS has struggled financially in recent years and recorded an after tax loss of some €650,575 in the year to October last, the court heard.

Mr Justice Sanfey said it was an “entirely unfortunate situation”. He, like hundreds of thousands of Irish students, had availed of the services of Usit a long time ago. “It is sad it has come to this,” hesaid.

The nature of Usit’s business meant it was “particularly seriously affected” by the pandemic and he hoped many other businesses affected will continue in business.

The interconnected nature of the Usit companies means it is very difficult for any of them to survive, he said. The holding company owes €1.7m to Ulster Bank and that is cross-guaranteed by the three other companies. Usit Ireland is entirely dependent on its summer trade and has cash flow requirements making it “completely impossible” to survive through this summer.

Given the fluid nature of the businesses, especially of Usit Ireland and that a multiplicity of people are affected, it is appropriate to appoint provisional liquidators as sought, he said.

He hoped that would give the companies “breathing space to rationalise their affairs and ensure everybody is treated fairly”.

Kinlay Group is owned by businessmen Michael Tunney and David Andrews. They bought Usit, popular with students booking J1 work/travel packages in the United States, out of examinership in 2002 with Neil O’Leary, a principal in Ion Equity. He sold his stake last year to the other two businessmen.

“Only a short few weeks ago, both USIT and the English School were trading successfully and we had exciting plans for the future,” said Mr Andrews, the chairman of the business.

“But the tsunami of effects related to the Covid-19 pandemic have left us with no business whatsoever and no possibility of overcoming these challenges.”

The last filed set of accounts for Kinlay Group, covering the 12 months to the end of October 2018, show it made a profit of €1.2 million on sales of €16.8 million. Its shareholders had pumped in €2.5 million in fresh equity that year.

A Leeds-based online learning venture owned by Kinlay Group, Teach & Travel, is unaffected by the liquidation and continues to trade.

1 Michael Smurfit: ‘I asked Trump to invite me to the White House for my 80th birthday’
2 ‘I’m so lucky to be in the Caribbean – a million miles from Derry Girls’
3 Household savings soar as consumers stop spending
4 ‘The recovery needs to be a full-scale economic renewal’
5 Small businesses are cannon fodder in zealous anti-virus experiment
6 ‘Never mind GDP; the most fundamental job of any leader is to keep his people alive’
7 Irish business of Carluccio’s restaurants to be wound up
8 Iput secures €200m in ‘green finance’ for delivery of new LinkedIn HQ
9 If you injure yourself working from home, is your employer responsible?
10 Tax and the Pandemic Unemployment Payment: Your questions answered
Real news has value SUBSCRIBE