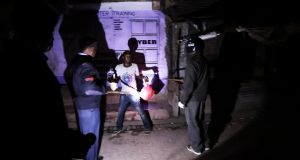 Kenyan police officers interrogate a man they found walking at night as they patrolled to enforce curfew in one of the most densely populated parts of Nairobi on Tuesday. Photograph: Daniel Irungu/EPA

After a 13-year-old boy bled to death from a police bullet in Kenya on Tuesday, calls are growing for the country’s police to be held accountable for violence they have used to enforce coronavirus-related restrictions.

Yassin Hussein Moyo died just after midnight on Tuesday morning, after being hit by stray gunfire on a third-floor balcony in the capital city of Nairobi.

“Yassin is short, so he climbed on a chair, held the rail on the balcony and started to look,” his mother, Khadija Abdullahi Hussein, said. “I told the kids, ‘Don’t worry about the police, we are in the house. There is nothing wrong that we are doing.’ But one officer kept his flashlight pointed at us.”

The family of boda boda motorbike driver Hamisi Juma Idd (49) also say he died from injuries after he was beaten by police officers enforcing a new curfew. A Kenyan police spokesman did not respond to a request for comment.

There are 59 confirmed cases of coronavirus in Kenya, one of whom has died. The east African country shut its borders to all non-residents on March 15th, and a dusk-to-dawn curfew took effect on Friday.

“It was meant to be a soft curfew to encourage people to stay at home, generally to help people to protect themselves, but the police took it like there was some kind of unrest in the country and they’re implementing the curfew very adversarially which is not very helpful under the circumstances,” said Otsieno Namwaya, an Africa researcher with Human Rights Watch.

“It is not exactly shocking as such because we are used to seeing Kenyan police using excessive force.” He said this has regularly happened over the past decade “to a point where they even begin to shoot, unnecessarily killing people”.

“Kenyan police have not learnt to talk to people and explain to people carefully and respectfully; to them the default reaction is to use the gun,” said Mr Namwaya. “They [have been] pushing people together like flocks of livestock, beating them without wearing protective masks, to me it is the most careless way of implementing a curfew to achieve these objectives.”

While the World Health Organisation has warned Africa to “prepare for the worst”, and confirmed coronavirus cases across the continent have almost reached 6,000, aid organisations and activists say it’s important to recognise that social distancing and isolation is unfeasible for many poor people.

“When we talk of sanitisers and social distancing, it is possible to implement that in high-income areas, but it’s not possible in low-income areas such as the slums of Nairobi, where you find a small room by 10 by 10 feet or less is accommodating probably around eight people or more,” said Mr Namwaya.

“You find most of the people who are affected by the measures are the low-income people who have to work on a daily basis to make a daily wage to make ends meet.”