Avolon in deal to buy 75 Boeing aircraft valued at $8.4bn 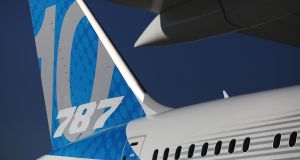 The tailfin of a Boeing 787 Max 10 passenger aircraft displays its livery during the 53rd International Paris Air Show. Avolon has an option to buy the variant 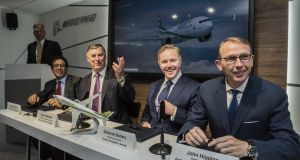 Pictured at the signing ceremony are Ihssane Mounir VP, global sales and marketing and Kevin McAllister, president and chief executive of Boeing with Domhnal Slattery and John Higgins of Avolon

The agreement which represents Avolon’s single largest order to date with Boeing, also includes an option to acquire a further 50 737 Max aircraft.

The Irish-based, Chinese-owned leasing operation made the announcement at the Paris Air Show, which is taking place this week.

“The order is anchored around the MAX 8 but we have full flexibility to move to other variants such as the MAX 10,” said Mr Higgins.

The new deal takes the lessors’ fleet up to 925 aircraft. The aircraft are scheduled for delivery from 2021 onwards

“We want to continue to be a growth company with young, fuel-efficient airplanes,” said Mr Higgins.

This new order, which is valued at more than $1.1 billion at current list prices, will, with the existing firm order for 100 Max 200s (and 100 options), allow Ryanair to grow its traffic to 200 million customers per annum by 2024.

1 Three Ireland switches on 5G network around the country
2 Pilita Clark: The looming legal minefield of working from home
3 New car prices could rise by up to €10,000 if taxes increase in budget
4 State should use Covid-19 impact on building costs to build homes
5 Former junior finance minister to head funds sector lobby group
6 Dublin-based ID-Pal raises €1m in funding as it looks to expand
7 State ‘should bail out’ troubled homeowners with mortgage assistance payment
8 Visitors to Ireland increased almost 60% last month
9 More financial firms setting up or expanding in Ireland despite Covid-19
10 Chris Johns: Boohoo exposed on pay and conditions in digital economy
Real news has value SUBSCRIBE