New airline to fly from Waterford to three English airports

Aer Southeast to fly to London Luton, Manchester and Birmingham from July 24th 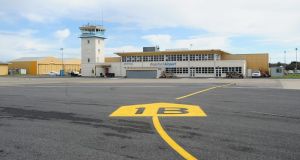 Skytruckers, the company behind the new airline, has a registered office at Waterford airport, and was incorporated in March of this year. It is owned by its registered director Einar Adalsteinsson, who confirmed that he was backed by an investor.

“We will be inviting more investors we know to come on board as we go. At the moment this is obviously a very small operation,” said Mr Adalsteinsson, who is also on the board of a Danish company called Backbone aviation.

He said the firm is leasing the operation of the flights from another airline regulated by the European Aviation Safety Agency. He said this method of doing business was extremely “cost effective…especially when business volume is fairly small, as is the case with Waterford airport”.

The last scheduled commercial service left Waterford airport in June 2016 after airline VLM went into liquidation. The size of the airport’s runway prohibits larger planes from landing. However, The Irish Times reported last September that the airport had plans to extend its runway.

It is understood the newest offering will operate six flights a week to Luton, three to Manchester and three to Birmingham. The cost of a seat will start from €79 one way.

Desmond O’Flynn, the chief executive of the airport, said he was pleased to welcome this “Scandinavian consortium to Waterford”.

“We have had detailed discussion with a number of parties since the loss of scheduled services in June last year, but we were very impressed with the aviation experience of the consortium and their commitment to this project.”

The new services will use a Saab 340 aircraft which has capacity for 34 passengers.

A spokeswoman for Saab said that aircraft that has been out of production since 1999. However, the company still offered 24/7 support to its customers.

She estimated there were roughly 350 of those aircraft still flying.

The airline is due to take bookings for the flights from Tuesday. However, the company’s website was not online by the close of business on Monday.