Flybe swings to loss due to slowing consumer demand

Despite a revenue increase, the regional airline posted a pre-tax loss of £19.9m 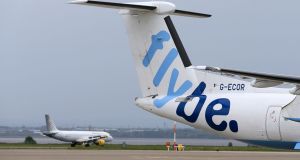 Flybe was stung by a £4.8 million writedown linked to an IT upgrade and anticipates further IT costs of about £6 million. Photograph: Tim Goode/PA Wire

Flybe said in a statement: “Despite the substantial progress in reducing the size of legacy fleet orders in 2015/16, Flybe has still seen significant capacity growth in a market where we witnessed slower growth in consumer demand.

“New routes and increased frequencies were targeted to cover marginal costs in the early years of operation, but do not contribute significantly to overall profitability. The capacity growth therefore had a negative effect on profitability.”

The firm was also stung by a £4.8 million writedown linked to an IT upgrade and it anticipates further IT costs of about £6 million relating to cancellation penalties on existing contracts.

Chief executive Christine Ourmieres-Widener said the airline had moved to drive down costs while reducing its flight capacity, adding that the new financial year had started well.

She added: “I am truly passionate about the airline industry and I see tremendous opportunities for Flybe to connect and engage with communities and to establish a reputation for excellence in serving our customers.

“We will be successful in delivering by continually focusing on our costs, increasing our knowledge about who our customers are and what makes them tick, achieving industry-leading operational excellence and implementing a great digital platform.” – (Press Association)