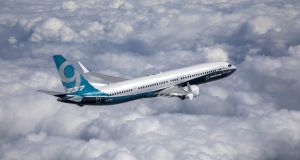 Ryanair is in talks with aircraft manufacturer Boeing about the possibility of acquiring more planes.

Its chief marketing officer, Kenny Jacobs told Bloomberg television that the company likes the 737 Max 200 “a lot”. Ryanair has ordered 100 of those craft and has said several times that it will take up an option to buy a further 100.

This will bring its fleet to 520 by 2024, when the airline believes it will fly more than 160 million people

Its chief executive Michael O’Leary recently said that it was considering buying small numbers of extra craft from Boeing. Ryanair is understood to have regular contacts with the manufacturer.

Mr Jacobs also called on the European Union and the United Kingdom to draw up a new bilateral aviation agreement this year, to prepare for what Ryanair expects to be a soft Brexit.

He said a soft Brexit in itself won’t address the issue of open skies but added that support for it from the Democratic Unionist Party, which looks likely to back Theresa May’s minority Conservative government at Westminster as the UK begins to negotiate its departure from the EU, was a positive step.