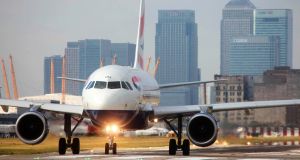 London City Airport begins its 30th year with a well-established record of growth. Hosting four routes and 15,000 passengers in 1987, it carried 4.5 million passengers on 50 routes last year. The airport also begins a year of redevelopment of the 30-year-old terminals to increase capacity to service more than 6.5 million passengers and add 30,000 additional annual flights and a new taxiway.

There has always been a strong Irish presence in LCY. From 1995 to 2006 it was owned by Irishman Dermot Desmond who reportedly paid £23.5 million and sold it for £750 million. Cityjet, the Irish headquartered airline, has been a linchpin client of the airport since 1994 and under various ownerships has continued the association. Declan Collier, airport CEO, was formerly CEO of the Dublin Airport Authority.

Aloft Hotel, the contemporary brand of Starwood Hotels now in the Marriott portfolio, is set to open its first property in Dublin next year in the Liberties. The 202-room property will have free wifi, large walk-in showers, meeting rooms, Wxyz bar, Recharge fitness centre and 24-hour deli Refuel. The lobby lounge will be on the top floor of the hotel with great views of the city. The keenly-priced hotel will appeal to tech-savvy travellers and will be managed by Blackpitts Hospitality headed by Niall Geoghegan, former CEO of Jurys Doyle Hotel Group.

No transatlantic service for North

The last United flight from Belfast to New York took off on January 9th with no future for a transatlantic service from the province. A £9 million rescue deal agreed by Stormont and the airline fell through because the financial package breached EU state rules. Norwegian Airlines are considering reinstating the service but there is no news, nor is there a date yet for the Cork to Boston service.