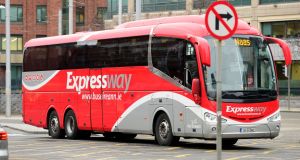 Shane Ross is expected to signal that the Government is prepared to provide more money to Bus Éireann for its non-commercial services.

It will also indicate it will assist in facilitating talks between unions and management without preconditions for tackling the crisis currently facing the company.

However, in a presentation to the Oireachtas transport committee today, the Minister for Transport is again expected to rule out the provision of State funding for the loss-making commercial Expressway coach services.

Yesterday, Unite said its members in Bus Éireann had voted unanimously in favour of strike action.

Other unions such as Siptu and the NBRU already have a mandate for industrial action if the cuts are imposed without agreement.

In his presentation, the Minister is expected to say that the Government is committed to ensuring that public transport services are adequately funded with increases being allocated to the subsidised public service routes “as resources allow”.

He is also likely to say the Government will “review how best to ensure a sustainable funding model for the free-travel scheme”.

The company and unions have argued the State does not cover the full cost of the provision of free travel for older people.

Mr Ross is expected to tell the committee the crisis at Bus Éireann will only be settled by open, constructive and realistic engagement between the company and its employees.

However, he will maintain that, despite all the accusations and counter -accusations about the future of the company, there are signs of hope.

“Amongst all the noise, we heard two clear messages. The first was that trade unions are willing to engage on the basis of no preconditions. The second was the acting chief executive confirming to the committee [last week] that nothing he has said or issued in recent weeks constitutes preconditions.”

The Minister is also likely to say that the Government will give an assurance to the people of rural Ireland that that National Transport Authority has statutory powers available to it to ensure that they will not lose connectivity as a result of any changes to the Bus Éireann network.

1 Irish companies restrict travel over coronavirus fears
2 Bank leaked my loan request to family who tried to rip me off
3 Suspicions rife as key Brexit trade talks begin in Brussels
4 Life as a Facebook moderator: ‘People are awful. This is what my job has taught me’
5 Bogus notion that supply will cure our housing woes
6 ‘The only time apartments were viable was in . . . Ballsbridge, Killiney and Dalkey’
7 How well paid do you think you are? Here’s how to work it out
8 First time buyers behind large increase in new mortgage approvals
9 Pharma giant AbbVie warned Government against ‘unfair’ €572m tax bill
10 Has CRH done enough to silence pesky Swedish activists?
Real news has value SUBSCRIBE