Centre to include most up-to-date technology for electric cars, says Connolly Motor Group 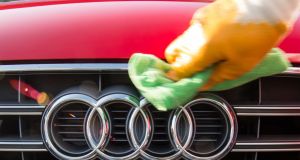 Ten new full-time jobs are to be created by Connolly Motor Group which is building a new Audi dealership in Galway.

The company will open the new Audi terminal at Ballybrit this summer, after an investment of €5 million. Work on the new 23,000sq ft dealership began just before Christmas in Briarhill Business Park, close to the Galway Racecourse in Ballybrit.

The new dealership and showrooms will be located on a 2.2 acre greenfield site beside the company’s current dealership, which it will replace.

The 10 new jobs will increase the number of full-time employees at the Connolly Motor Group to 193 – with 35 of those located in Galway.

The ultra-modern car retail facility will be based around Audi’s newest design concept. Connolly Motor Group also opened an “Audi Terminal” building in Sligo in 2011.

The company said it would include the most up-to-date technology for electric vehicles with multiple power points.

The facility will also have showrooms with space to display up to 14 cars, and 180 outside car spaces. It will also house a 10-bay workshop and a five-bay valet building.

“The new Audi Terminal building is all part of the group’s plans to continue to expand and improve our offerings to our loyal customers in the west and northwest.”

“We are delighted to be able to offer customers a brand new market-leading showroom in Galway,” he said. “We were excited to see work under way when we visited Galway and look forward to its opening this summer.”

1 Coronavirus: Property rental in the jaws of the epidemic
2 I want to change my will quickly in case I fall ill. Do I need a lawyer?
3 Collison brothers worth an estimated €2.9bn each
4 WhatsApp limits message forwarding to slow spread of misinformation
5 Purchase limits eased at supermarkets as trading levels ‘consistent’
6 How can the State support me now I’ve lost my job?
7 Irish back pain medical device group to pull stock market listings
8 Central Bank freeing up rainy day money could facilitate up to €16 billion in lending
9 EU finance ministers hope to thrash out Covid-19 recovery plan
10 Kerry fintech Taxamo agrees deal with Deloitte
Real news has value SUBSCRIBE