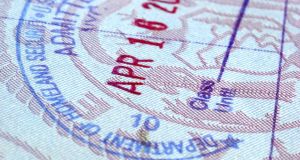 Passengers from other European countries are increasingly seeing the advantage of travelling to the US via Dublin and Shannon, said Regional and Business Airports Group chair Neil Pakey. Photograph: iStockphoto

Politicians including Minister for Children Katherine Zappone have questioned whether US customs and immigration should continue to pre-clear travellers at Dublin and Shannon airports in light of President Donald Trump’s order banning entry to citizens of seven Muslim-majority nations.

Mr Pakey, who now chairs a trade association, the Regional and Business Airports Group, warned that the suggestion should be “taken off the table” immediately as it would threaten one of the Republic’s strategic advantages.

Clearing customs and immigration at Dublin or Shannon allows those travelling to the US to be treated as domestic passengers at their destination airports, cutting out potentially long waits after they arrive.

Mr Pakey pointed out that passengers from other European countries are increasingly seeing the advantage of travelling to the US via connections at Dublin and Shannon.

He argued that this creates more demand for direct transatlantic flights from both airports, which leads to more services, which aids both tourism and business.

“The US pre-clearance facility, pioneered in Shannon, has become the envy of airports and regions in the UK and across Europe, ” he said.

“My fear is if it were removed or suspended, the US may not ever restore it, and with that goes Ireland’s strategic advantage.”

Mr Pakey added that the Republic could tackle fears about the impact of the entry ban through diplomatic channels.