‘I want to have all air fares on Ryanair free’, says O’Leary 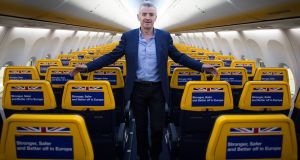 Ryanair chief executive Michael O’Leary: he told German business newspaper “Handelsblatt” that the airline has ditched its plans for transatlantic flights due to a shortage of aircraft. Photograph: Stefan Rousseau/PA Wire

Free airline tickets could be a reality, Ryanair chief executive Michael O’Leary has revealed in an interview with German business newspaper Handelsblatt, suggesting that instead of earning revenues on fares, the low-cost airline will depend on sales from in-flight snacks and internet services.

“One day I want to have all the air fares on Ryanair being free,” Mr O’Leary told the newspaper. “Ancillary revenues already make up 30 per cent of our revenues. We might never get there, but at least it’s the objective.”

On the wave of protectionism and populism emanating on both sides of the Atlantic, Mr O’Leary said that some kind of “collective insanity” has taken place, as he criticised British prime minister Theresa May’s contradictory approach in exiting the EU at the same time as portraying the country as a champion of global free trade.

“Britain wants to be a global trading nation with free trade? So why don’t you have free trade with the biggest trading bloc of the world, Europe? It’s mad,” Mr O’Leary said.

He also criticised US president Donald Trump’s rhetoric on trade and immigration.

“Isolationism has never yet succeeded anywhere in the world. If it did, North Korea would be the world’s greatest economy.”

Mr O’Leary told the newspaper that Ryanair has ditched its plans for transatlantic flights due to a shortage of aircraft.

“We no longer have plans to do transatlantic,” Mr O’Leary said. “At the moment there is no aircraft available. Even if you could find an aircraft, there is none available for the next four years.”