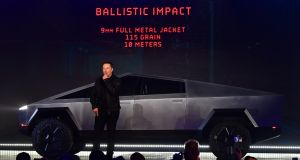 The last time Elon Musk held a Tesla briefing similar to the battery day event he’ll host this week, he boasted about his track record of following through on big promises.

“All these things, I said we would do them, we did it,” Mr Musk said during Tesla’s April 2019 autonomy day. “Only criticism – and it’s a fair one – is sometimes I’m not on time. But I get it done and the Tesla team gets it done.”

The chief executive was right in some respects and candid in nodding to the times it took Tesla longer than he predicted to bring things to market. What he didn’t acknowledge was that several products he’s hyped at events that have burnished his Silicon Valley-visionary image were barely commercialised, still aren’t available or were abandoned entirely.

Mr Musk, 49, won’t be selling investors a bill of goods on Tuesday – batteries are core to the existing products and technology that have made Tesla one of the most valuable companies in the world. But the tendency to overpromise has contributed to the billionaire having become such a divisive figure with many doubters still left to prove wrong.

Here’s a look back at what Musk has promoted at live events over the years:

Tesla was less than 20 months removed from its initial public offering and hadn’t delivered its first Model S sedans when Musk unveiled a prototype of the Model X, which he said would go into production in late 2013.

The crossover SUV arrived almost a full two years late, with the first customers getting them in September 2015. The first thing he called attention to at the Model X unveiling – its double-hinged “falcon wing” doors – later slowed the SUV’s rollout, and Mr Musk would later blame disappointing deliveries on the “hubris” of trying to do too much with the vehicle.

Mr Musk claimed during the unveiling that the doors didn’t go any higher than a normal SUV’s rear hatchback, but some customers opened them into the ceiling of their garage. The Model X has consistently scored poorly in Consumer Reports rankings while Tesla’s other vehicles have scored well.

This was one of Musk’s more problematic presentations because the product offering never really came to pass.

Model S drivers would have the choice of replenishing their batteries at Tesla superchargers that would always be free, Mr Musk said, or drive to stations featuring the same sort of automated equipment used in the company’s factory that would swap out one pack for another. He demonstrated this could take place in less time than it takes to fill a gas tank.

Tesla later started charging for supercharger use, and Mr Musk said there ended up being little customer interest in battery-pack swaps. California’s Air Resources Board for a time awarded Teslas extra zero-emission vehicle credits based on the company’s plan to offer battery swaps, but tweaked its rules less than a year after Mr Musk’s demonstration.

Mr Musk sent out a cryptic tweet days before his appearance: “About time to unveil the D and something else.” The D stood for a dual motor version of the Model S, and the something else was Autopilot, which turned out to be anything but an afterthought for Tesla.

The chief executive announced that all cars produced in the two weeks leading up to the event had been built with radar, image-recognition cameras and ultrasonic sonar installed. “The car can do almost anything,” Mr Musk said, listing features such as lane keeping, automatic cruise control and self-parking, and the ability for owners to summon their vehicle in a parking lot. Claims that Autopilot would one day render Teslas fully capable of driving themselves didn’t come until later.

Tesla ended up going through an ugly breakup with Mobileye, a key supplier of early Autopilot harware, in 2016. After debuting its Summon feature in 2019, some owners posted footage showing their cars getting into scrapes with other vehicles or narrowly avoiding accidents. Consumer Reports called it “glitchy.”

Musk laid out a vision for harnessing the sun – or as he colorfully put it, “this handy fusion reactor in the sky” – by not only collecting energy from solar panels but also storing it in batteries for the home.

“Now, the issue with existing batteries is that they suck,” he said, calling them expensive, unreliable, stinky, ugly and “bad in every way.” The missing piece, Tesla’s $3,500 Powerwall, “looks like a beautiful sculpture on the wall,” he said. Customers wouldn’t have to worry about running out of power and could go off the grid. The product could scale globally and be of particular use in remote parts of the world where there’s intermittent or expensive electricity.

In the five years since this event, cars have remained the dominant aspect of Tesla’s business, with 86 per cent of revenue coming from automotive last quarter. Mr Musk has said the business is “cell-starved,” meaning Tesla lacks the supply of battery cells it needs to support both its cars and Powerwall.

Tesla managed to follow through on a lot of the specifications Musk promised for the Model 3, including at least 215 miles of range. He drew laughs from the crowd by alluding to his propensity for missing deadlines when announcing the timing of initial deliveries: “I do feel fairly confident that it will be next year.”

The event was a smash success, with Tesla taking hundreds of thousands of deposits for its first affordable, high-volume car.

But one key promise the company failed to follow through on was a $35,000 starting price. Three years later, Mr Musk announced plans to close most of Tesla’s stores as a cost-saving measure that would allow him to offer the car at that cost. He backtracked 10 days later. Today, the cheapest Model 3 is $37,990.

Months after proposing what he referred to as a “blindingly obvious” and “no-brainer” acquisition, this event helped get Tesla shareholders behind Mr Musk’s plan to buy SolarCity, the debt-saddled solar sales-and-installation business he co-founded with his cousins.

“At the time I thought it made strategic sense for Tesla and SolarCity to combine. Hindsight is 20-20,” Mr Musk said in a deposition two-and-a-half years later. “If I could wind back the clock, you know, I would say [I]probably would have let SolarCity execute by itself.”

Time will tell if the Semi truck truly offers “quasi-infinite” brake life and “thermonuclear explosion-proof” glass, as Mr Musk claimed. The chief executive said at the time the company would start production in 2019. It’s now scheduled to begin next year.

Mr Musk threw show-goers for a loop by unveiling surprise cargo in one of the trucks: a new Roadster prototype he said would be “the fastest production car ever made, period.”

The chief executive has walked back plans to make the car available this year. In May, he listed several other tasks Tesla will need to achieve first, suggesting it may not arrive until after next year.

With Model 3 production finally in full swing after a bruising year in which Mr Musk said Tesla came within weeks of running out of money, he thanked the crowd for supporting the company through a difficult period. He imitated his critics – “You’re a fraud!” – and offered a retort referring to the cars the company had delivered: “You can drive that fraud!”

To Tesla’s credit, the Model Y arrived much earlier than scheduled. Mr Musk said at the time of this event that the crossover would start reaching customers in the fall of 2020. That timeline was accelerated to March.

“We expect to have the first operating robotaxis next year,” he said. “With no one in them. Next year.” Any customer would be able to add their car to Tesla Network, a service Mr Musk described as a combination of Uber and Airbnb. Model 3 owners would be able to share their car whenever they wanted and make money on people taking it for a drive. Tesla would take a 25 per cent to 30 per cent cut of the revenue. Within roughly two years, Mr Musk predicted, the company would stop building its cars with steering wheels or pedals.

None of this has come to pass yet. The chief executive also said that by the middle of 2020, Tesla would have more than 1 million cars on the road with hardware capable of full self-driving and features completed to where vehicle occupants wouldn’t need to pay attention. Today, the company still warns Autopilot users they have to keep their hands on the wheel and eyes on the road.

It took a matter of minutes for the prototype of Tesla’s first pickup to fall short of expectations in an over-the-top event featuring a hologram “cybergirl,” sledgehammers and balls of flame shot into the air.

A demonstration of how tough the truck’s stainless steel “exoskeleton” went well, with the doors sustaining several blows without denting. But an attempt to show off the strength of its transparent-metal “armor” glass went disastrously – a metal ball shattered both the first- and second-row windows.

1 Guinness brings out a non-alcoholic version of the black stuff
2 How long can Government afford to keep State pension age at 66?
3 Google's incredible power is the result of decades of regulatory failure
4 Galway’s Aerogen plays key role in Covid-19 therapies
5 Don’t worry about the deficit – the lockdown risk is to jobs
6 Half of businesses plan to freeze pay next year
7 Farm lobby seeks EU ban on vegan ‘burger’ and veggie ‘sausage’
8 Frank Fitzgibbon stepping down as Sunday Times editor
9 How much will a Covid-19 vaccine cost?
10 Irish start-up Wayflyer raises €7.8m in seed funding
Real news has value SUBSCRIBE