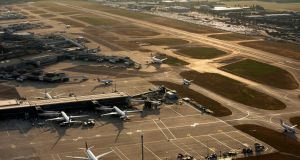 Aircrafts taxi along the perimeter of the north runway at London Heathrow Airport.

Britain’s Heathrow Airport said passenger numbers in August were down 81.5 per cent compared to last year, as it repeated its call for the UK government to introduce testing as an alternative to the country’s 14-day quarantine rule.

Heathrow, which before the Covid-19 pandemic was the busiest airport in Europe, said that North American passenger numbers were down 95 per cent compared to last year as the 14-day quarantine rule deters long-haul travel.

“Heathrow urges the government to introduce testing as an alternative to 14-day quarantine to protect millions of jobs across the UK and to kickstart the economic recovery,” the airport said in a statement on Friday. – Reuters