Dublin Airport to stop cars picking up passengers outside terminals 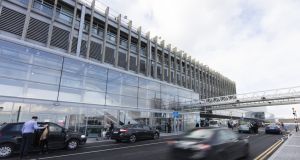 The proposed new paid drop-off and pick-up zones will operate in front of terminal one and terminal two, and will not be introduced during the Covid-19 crisis. Photograph: DAA

Airport operator DAA is seeking planning permission to install a new paid drop-off and pick-up zone at Dublin Airport, in an effort to reduce car journeys to and from the facility and stop private drivers picking up passengers outside terminals.

The proposed new paid drop-off and pick-up zones, which will have to be approved by Fingal County Council, will operate in front of terminal one and terminal two, and will not be introduced during the Covid-19 crisis.

Under the plans, DAA will change the internal road layout and install new lanes and barriers at the main airport exit.

Currently, private cars are permitted to drop off in front of both terminals at Dublin Airport, but no private vehicle pick up is permitted. A spokesman for DAA said the current system has been “abused” by some for years, with cars illegally stopping to wait for pick-ups or circling the campus roads several times before they collect a person.

While DAA has not decided what charges to implement in the new set down area, figures from Cork Airport, where a similar operation is in place, are worth noting. There, the first 15 minutes are free. A driver then pays €3 for 16-20 minutes, €5 for 21-30 minutes, €10 for 31-60 minutes, and €20 for 61-120 minutes. Anyone who stays beyond 121 minutes may have their car clamped or towed away.

A similar scheme is also in place in Belfast International Airport, although a driver is charged £1 for being in the drop-off lane for up to 10 minutes, with prices rising for longer stays. Parking rates for pick-up in Dublin Airport start from €3.

DAA said the aim of the new system is to reduce car journeys to and from the airport and to encourage passengers to make greater use of public transport. All revenue generated will be invested in sustainability initiatives at the airport, including a proposed solar farm, the conversion of its car park and staff shuttle bus fleet from diesel to low emission vehicles, and the installation of more electric vehicle charging points.

A spokesman added that the new system will not be introduced during the pandemic, but works will take place shortly if the project receives approval from planning authorities. “It will be more efficient to complete the construction work during the current downturn in passenger numbers, as it will have significantly less disruption on the airport road network,” he said.

Additionally, a free drop-off and pick-up option will still be available at the express red long-term car park. A new reduced fee 30-minute parking period will also be introduced at Dublin Airport’s short-term car parks, beside the passenger terminals.