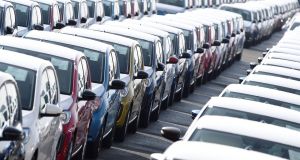 The licensing figures also show that Volkswagen (902) was the most popular make of new private car licensed.

The number of new private cars licensed increased year on year last month for the first time since the Covid-19 crisis, the latest figures from the Central Statistics Office (CSO) show.

The number of people opting for electric or hybrid cars continued to rise.

Comparing Tuesday’s CSO figures with the recently published Society of the Irish Motor Industry (SIMI) figures, CSO statistician Olive Loughnane said it was important to note that 63.7 per cent of new cars licensed in August were registered before August.

New car registrations, as reported by SIMI, were 4,875 in August.

The monthly licensing figures from the CSO and the registration figures from SIMI differ due to the different dates on which a vehicle is registered (number plate) and licensed (tax disc).

A vehicle may be registered by a dealership in advance of a sale, and vehicles which are registered in a given month may not be licensed until a later month.

Electric and hybrid cars continued to grow in popularity. These accounted for 19.1 per cent of new private cars licensed in the first eight months of 2020, compared with 12.5 per cent in the same period in 2019.

Hybrid cars licensed between January and August amounted to 834 (8.2 per cent up) despite the drop in new cars licensed.

The licensing figures show that Volkswagen (902) was the most popular make of new private car licensed, followed by Skoda (664), Ford (652), Hyundai (612) and Kia (594). Together these five makes represent 46.5 per cent of all new private cars licensed in August.

There was a decrease of 10.1 per cent in the number of new goods vehicles licensed in August bringing the total to 2,247.

The CSO figures are based on the National Vehicle and Driver File compiled by the Department of Transport.