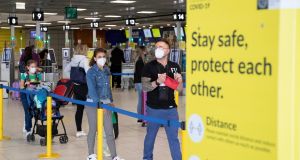 DAA’s losses so far this year are now approaching €150 million, according to its chief executive Dalton Philips.

In an online interview he told the Irish Tourism Industry Confederation’s chief executive Eoghan O’Mara Walsh that the coronavirus pandemic has had a “devastating” impact on the operator of Dublin and Cork airports.

DAA is losing about €1 million per day through the crisis, he said.

The latest figures from the DAA show passenger traffic through Dublin Airport was down 85 per cent last month compared to August last year.

Just 516,000 passengers flew through Dublin last month, down from more than 3.4 million for the same period a year ago.

Traffic through Dublin from European destinations was down 80 per cent, there was an 89 per cent decline to and from the UK, and north American numbers fell 95 per cent.

So far this year, DAA says the effects of the pandemic have cost it 16 million passengers.

Tánaiste and Minister for Jobs Leo Varadkar on Wednesday indicated that the Government’s upcoming plan for Ireland to live with the pandemic over the medium term would open the country back up to international travel.

In his interview recorded before Mr Varadkar’s comments, Mr Philips suggested that the Government’s anti-virus restrictions were “strangling” the country.

“We have to get the country going again. We have to balance the different interests between health and the economy,” he said.

Mr Varadkar suggested that the Government would look to introduce rapid testing for the virus at Dublin Airport as a way to facilitate travel and lessen the reliance on quarantine measures to protect Ireland from importing the virus in air passengers.

Mr Philips said it would not be feasible to test every passenger that flies into the airport. Instead passengers should be able to get a test in their country of origin in the three days before flying to Ireland, and bring a document certifying this with them when they travel. “You would present it at immigration and you would be allowed through.”

He said it could take three or four years for passenger numbers at Dublin Airport to recover.

The airport is going ahead with a new runway project, but Mr Philips suggested other capital expenditure projects could be scaled back.