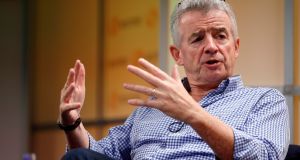 Michael O’Leary’s base pay for the financial year ending in 2021 will be cut by half to €250,000. Photograph: Reuters

Ryanair suffered a significant shareholder revolt on Thursday over plans to pay chief executive Michael O’Leary a €458,000 bonus despite the airline furloughing staff and taking state support in response to the pandemic.

A third of the carrier’s investors voted against the airline’s non-binding remuneration report, which included Mr O’Leary’s bonus payout for the year up to the end of March 2020, at the annual meeting in Dublin.

The rebellion was larger than what British Airways owner International Airlines Group suffered this month, when 20 per cent of shareholders voted against its pay plan. This included a bonus of £883,000 (£967,000) for IAG boss Willie Walsh.

It is the second year in a row Ryanair has faced protests from shareholders. Last year only 50 per cent voted in favour of the pay report after Mr O’Leary agreed a five-year contract, including 10 million in share options.

Investor adviser Institutional Shareholder Services had recommended a vote against the pay report for the financial year to the end of March because it was “difficult to justify”.

The world’s biggest proxy adviser criticised a bonus that was about 92 per cent of the maximum Mr O’Leary could receive at a time when the aviation industry is in turmoil and suffering its worst crisis.

Glass Lewis, the world’s second-biggest proxy adviser, had urged shareholders to abstain. In the final count, about 65 per cent voted in favour, 33 per cent against with 2 per cent abstaining.

The protests are the latest sign that executive bonuses are becoming a flashpoint for investors concerned about how companies are reacting to the pandemic.

Asset managers such as M&G have warned that some corporate bosses are not sharing the pain and are enjoying large payouts, despite businesses furloughing staff and cutting dividends.

Ryanair has so far claimed £600 million in support through the Bank of England’s Covid Corporate Financing Facility, as well as making use of the UK’s Job Retention Scheme.

In its latest financial report, Stan McCarthy, chairman, warned that Ryanair had never before “faced such an existential crisis”.

Before the pandemic struck, the airline had expected to carry more than 150 million passengers in the 12 months to the end of March, but now predicts numbers closer to 50 million.

In July, Mr O’Leary warned that further disruption caused by a second wave of infections in the autumn could lead to further pay cuts and job losses. The airline fell to a €185 million loss in the three months to the end of June and already plans to axe up to 3,000 jobs. It has threatened to shut down bases in Cork and Shannon for the winter.

The annual meeting came as Ryanair prepares to take its battle against government-led bailouts in the airline sector to the European courts. The first hearings are scheduled for next week, as the carrier challenges what it calls “state aid doping”, insisting government interventions to about a dozen airlines are illegal under European law and would leave the competitive landscape distorted.

“It is important that someone stands up for competition in this industry, and for consumers,” said Juliusz Komorek, the airline’s chief legal officer.

“We believe that allocating over €30 billion to 10 plus airlines and forgetting about everyone else who provides connectivity in Europe is not going to end up contributing to consumer welfare,” he said.

1 Admission of mistake in Oxford vaccine dose raises doubts over reliability
2 Move to EU or face disruption, City of London is warned
3 Cliff Taylor: Deal or no deal we are now heading for a hard Brexit
4 Fiona Reddan: Who’s afraid of Revolut? Not AIB and BOI it seems
5 An Post parcel volumes to hit weekly record of 3.3m
6 Foxconn to shift some Apple production to Vietnam to minimise China risk
7 Delta and Alitalia to launch ‘quarantine-free’ flights from US to Italy
8 Irish Life fund pays €49m for 94 Dalkey apartments
9 Karlin Lillington: How I managed to cut my mobile phone bill by at least half
10 Last orders for Rí-Rá and Globe as Central Hotel gets green light to expand
Real news has value SUBSCRIBE