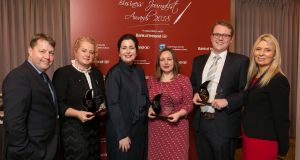 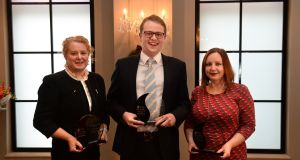 The awards, which were presented during a ceremony at the Westbury Hotel, Dublin, on Monday, are designed to “recognise excellence in business journalism” across print, broadcast and online formats.

The Specialist Business Reporter category was awarded to Fiona Reddan of The Irish Times. One of her winning submissions was on securing a State pension, while the second was entitled: “Teacher, nurse, average earner – what house could they buy in 1995, what can they buy today?”

The Upcoming Journalist of the Year prize was jointly awarded to Peter Hamilton of The Irish Times and Amy Molloy of the Irish Independent.

The Business News Story award went to Dearbhail McDonald, Shane Phelan and Samantha McCaughren for a submission entitled “ODCE claims INM data taken off site and ‘interrogated’ but ‘board did not know’”, which appeared in the Sunday Independent.

The Economic Commentator/Business Analyst award was won by Stephen Kinsella of the Sunday Business Post for two submissions.

The first was entitled “Ireland’s Generation Game”, while the second was headlined: “Taxes, Tweets, and Multinationals. An international problem we need to solve domestically.”

Finally, the Business Feature award went to Tom Lyons of the Sunday Business Post for his submission: “Siteserv: Anatomy of a deal.”

In addition, an Outstanding Achievement Award was presented to Tony Connelly of RTÉ for his contribution to business journalism, in particular, his reporting on key events in Europe and how they impact on economic affairs, business and society.

“These awards give us an opportunity to stand back for a moment and reflect on the critical importance of media and the role it plays in our society,” she said.

“And, they showcase the versatility and capability of Irish business journalists who – irrespective of broadcast or publication format – deliver reporting of the highest standard.”