Foreign firms account for most of State’s industrial output 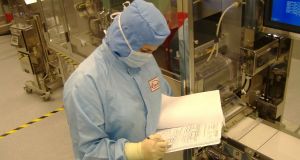 Foreign-owned enterprises accounted for nearly five times the industrial output of Irish firms in 2016 but had a smaller employment footprint.

The industrial sector typically includes manufacturing, mining and utilities. In the Republic, it is dominated by big pharma and biotech firms, which locate a significant portion of their production chains here to avail of the low corporation tax.

On a regional basis, Dublin accounted for 18 per cent or €32 billion of industrial output in 2016 with foreign-owned enterprises accounting for 71 per cent. The midwest, southeast and southwest regions combined produced €112.4 billion or 62 per cent of the Republic’s total industrial output.

The midland region was the only region who had a higher proportion of gross output attributable to Irish-owned industrial units at 68 per cent.

The total spend for the Dublin region was €2.6 billion on wages and salaries while the midland region reported the lowest total spend at €500 million.

The European Union accounts for more than 50 per cent of total goods exports with a significant share going to Belgium.

Antwerp is one of the largest global drug redistribution hubs and receives most of the State’s pharma exports which are not destined for the United States. The US is the main non-EU destination, accounting for 25 per cent.