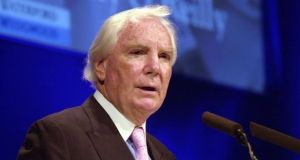 Sir Anthony O’Reilly, the former chairman of Independence News and Media, has reportedly filed a petition in the US for his bankruptcy in the Bahamas to be recognised

Irish banks are accused of “bribing” house hunters by paying up to €2,000 cash and other incentives in a bid to stop them drawing down mortgages that require Central Bank of Ireland exemptions, in a piece by The Sunday Times Ireland.

The inducements are reportedly designed to encourage house hunters to avoid drawdowns until next year. Banks contacted did not comment on the allegations.

The same newspaper reports that Irish banks were used in the theft of millions of euros in a Russian tax fraud case.

The Sunday Times also reports that Sir Anthony O’Reilly, the former chairman of Independence News and Media, has filed a petition in the US for his bankruptcy in the Bahamas to be recognised.

Notice of Mr O’Reilly’s petition to be recognised in the US was filed last week with a judge who is hearing an action against the businessman by a former nurse and personal assistant.

Sabina Vidunas claims O’Reilly renegned on an oral contract that he would give her shares in a number of companies.

Healthcare services group Uniphar is still weighing up a public listing, according to the Sunday Times as is property group Tetrach, which the paper says has appointed three non-executive directors to its board ahead of a potential IPO. Tetrarch recently put on ice plans to IPO this year due to weak markets.

The Broadcasting Authority of Ireland (BAI) has held talk with Facebook over new EU rules on material broadcast of social media platforms, according to The Sunday Independent.

In other Facebook news, the Sunday Telegraph reports that a judge in Silicon Valley has ordered the confiscation of equipment that may have been used to leak secret company documents to British MPs last week.

The Sunday Independent says pharmacy chain Sam McCauley is to move its corporate headquarters from Wexford to Dublin. The move is due to a wish to seek a greater pool of staff for the company which has had its HQ in Wexford since it was founded in 1953.

Commercial developer Kennedy Wilson has questioned the accuracy on rent levels in the Republic, according to the Sunday Business Post, which reports that the company told Minister for Housing Eoghan Murphy that the ‘record-high’ figures do not include existing tenancies.

The same newspaper says that AIB is preparing to proceed with the sale of a €1 billion non-performing loan portfolio known as “Project Beech”. The paper suggests ’vulture funds’ will be the likely bidders for the portfolio.

Elsewhere, the Post reports the Microsoft told the Government earlier this year it was concerned that new European privacy rules could interfere with its ability to detect child abuse material.

The software giant is concerned ist PhotoDNA system will not be permissable under the ePrivacy regulations.

The same paper says Thermo King has invested €50 million in a new plant expansion in Galway. The expansion will include a new assembly line and a big investment in product design and automation, the newspaper reports

* This article was amended on December 3rd.