Work it: The online networks putting women in the driving seat 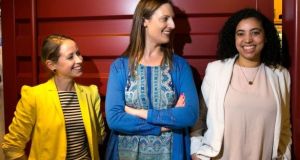 Elva Carri, Pamela Newenham and Áine Mulloy of GirlCrew: ‘We discovered many women in Dublin were looking to climb the career ladder, change jobs or set up their own business, and were unsure how’

Thanks to social networking there are plenty of ways to make contacts and connect without ever attending a real-life networking event. Think of the numbers: there are claimed to be more than 4 billion people online, and the number of people on social media makes up a sizeable proportion of that. Facebook and YouTube are among the most-visited websites in the world, and social media has established itself as a way for both businesses and customers to stay in touch.

Online networks have become increasingly valuable to women looking to strike out in the business world, and networks to help them get ahead are becoming more common online.

Bumble’s approach puts women in the driving seat. The company, which was founded by Whitney Wolfe Herd in 2014, has 36 million registered users worldwide across its dating, friendship and business networks. While many people will know it as an online dating app, Bumble launched its professional networking app in Ireland a few weeks ago. It still operates on the same premise – women make the first move – and a photo is necessary for each account so the company’s photo moderation technology and team can verify that you are a real person. And the online dating profiles are completely separate from the professional networking app.

“We actually created three separate verticals within the Bumble app to remove the grey area that comes with dating, finding friends and professional networking. You set up three separate profiles based on what kind of relationship you’re looking for and we’ve added an option to remove the dating portion of our app for our users who are married or in relationships,” explains Wolfe Herd. “In our app settings, when you turn off dating mode, there will be a time stamp with the date that confirms when you turned off Bumble Date. We created this to help ease any worries about having Bumble on your phone when you are just looking for friends or networking.”

The platform avoids using gender to filter potential contacts on the site, conscious of gender discrimination that exists in the workplace.

“The vision for Bumble from the outset always included evolving into friendship and networking. Gender inequality spreads well beyond just dating so we knew we always wanted to create a solution for the networking space as well. Simultaneously, we were also hearing from our users that they wanted a better way to network online so we knew we were on the right track,” says Wolfe Herd.

“Our goal for Bumble Bizz is to give you the power to change your professional life from the palm of your hand. Bumble Bizz is an experience designed for our users to network in a manner that’s focused on creating business relationships and opportunity over simply finding a new job. A key element of growing in your career includes building new professional relationships. There’s value in networking where you are, regardless of whether you’re a CEO or just entering the workforce. You never know when one connection will change your life.”

Another company out to increase the ability of women to connect professionally is GirlCrew. The Irish company is all about connections. The company, which was set up by Elva Carri, Pamela Newenham (a former Irish Times journalist) and Áine Mulloy with the intention to use online tools to help women make real-life friends offline. But the company has also developed a successful professional aspect, with a series of events aimed at entrepreneurs and businesswomen.

“We created GirlCrew Pro as we discovered many women in Dublin were looking to climb the career ladder, change jobs or set up their own business, and were unsure how,” says Newenham. “Our members were unsure how to ask for a pay rise, and how to switch careers. We wanted to get the best possible advice to help them.”

However, there is a perception of the traditional networking event as outdated, hastened by online networking services. Wolf Herd says it can feel antiquated. “You don’t necessarily want to go to a networking event before or after work either. Our users told us that they often feel uncomfortable at networking events, too,” she says. “Plus, women continue to receive unwanted personal messages on other professional platforms online. So we decided it was time to create a digital networking platform where women make the first move.”

Although networking events have fallen out of fashion, Samantha Kelly, founder of entrepreneur support network Women’s Inspire Network, says face-to face interaction is still best. “The human element is still important,” she says. “Sometimes the old school is the best. But a lot of people can’t get out [to networking events] because they’re time-poor. Social media is a wonderful way to connect with like-minded people.”

Kelly says building up a network online can help face-to-face networking down the line.

“It’s hugs not handshakes when you meet in real life,” she said. “The power of online is that you can get all the information right now. It’s about having your finger on the pulse.”

There is one area where face-to-face interaction has the edge over online: trust. Verification procedures are important, something both GirlCrew and Bumble put time into before verifying members.

“Safety is the utmost priority at Bumble and we do a lot to ensure that our users have a good experience on our app,” says Wolfe Herd. “We have over 4,000 people moderating our app across the globe.”

Social media networks are still developing. While it can be a positive thing – watching something new grow and take hold – it can also be a tricky process to navigate, particularly for businesses. Companies using Twitter and Facebook for marketing have often found themselves on the wrong side of social media. Remember when Twitter users hijacked Microsoft’s bot experiment Tay to turn it into a racist, spewing profanities and glorifying drug use? Then there was the time that US Airways accidentally tweeted a pornographic picture, or when Aldi Australia asked Twitter users what they tasted for the first time that turned them into a lover of the supermarket, with predictable unprintable responses.

When trolls took over a Walkers Crisps campaign encouraging customers to send in their selfies as part of a competition for Champions League final tickets, Gary Lineker found his likeness holding pictures of serial killers and sex offenders.

Social media campaigns can go wrong – badly – but companies can recover. Still, it’s best to try to avoid destroying your business with an ill-considered tweet. Injecting a bit of personality is not a bad thing for your brand or business, but treading carefully is advised.

That also goes for your personal accounts. The lines between business networking and personal social networks are becoming increasingly blurred, and it is common for views expressed in personal tweets to become mixed up with a company’s business reputation. There can be the temptation to forget that personal social media can reflect on your business life. Kelly cautions against getting too complacent.

“I’ve made the mistake myself. In the early days, I had a rant,” she says. “But you never know who is watching.”

It’s a legitimate concern. You may find your professionalism called into question, or simply attract the wrong type of contacts; at worst, it could cost you clients. The most recent person to find themselves out of a job because of their past tweets was James Gunn, director of Guardians of the Galaxy III. But he is by no means the first and won’t be the last.

Entrepreneurs and businesses need to decide what kind of customer they want to attract, and make sure their social and business networking presence reflects that, said Kelly. You won’t please everyone, but if you are hitting your target market, that’s what counts.

“Not everyone likes me. It doesn’t matter,” Kelly says. “If you are adding value, people will remember you for that.”