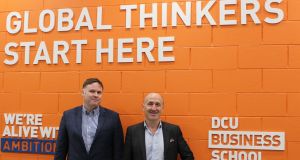 Bert Farrell and David Brophy of Zoosh Ventures. The other co-founders of Zoosh are Mervyn Graham, Balazs Bakos and Kimmo Arrpe.

Zoosh Ventures, which works with early stage tech start-ups on their commercialisation, product build, entrepreneurial development and growth strategy, said the overall value of the fund could top €2 million.

It said the new Zoosh Investment Partnership will make as many as 15 investments in software-as-a-service (Saas) start-ups over the next 18 months.

“The fund is geared to investing in entrepreneurial ventures at both the concept stage and at the early seed investment stage,” said co-founder Bert Farrell, formerly a manager of Enterprise Ireland’s New Frontiers entrepreneur development programme.

The Zoosh Investment Partnership is structured as a limited partnership with a number of Irish and European investors involved.

Zoosh Ventures is one of two businesses operated by Mullingar-based Zoosh Group. The second one, Zoosh Digital, is a specialist design and cloud business application development provider.

Mr Farrell established Zoosh Group with Mr Brophy in 2014. The latter previously led a major restructuring programme at property development company Ballymore during the recession after being poached from Smurfit Kappa by businessman Sean Mulryan. The other co-founders of Zoosh are Mervyn Graham, Balazs Bakos and Kimmo Arrpe, all of whom previously held senior roles at Nokia.

The group employs 40 people across operations in Ireland, Finland, Hungary and the US. It has predominantly backed Irish start-ups so far with sport scouting platform Profile 90 and digital ticket delivery system provider TixServe, among the companies to emerge from the Zoosh stable.