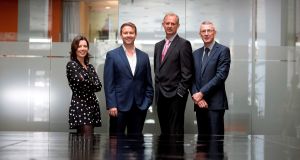 Data-protection specialist Sytorus has secured €1.7 million in investment from the Bank of Ireland Kernel Capital early- and growth-stage funds as part of a bigger multimillion-euro fundraising initiative.

The company, whose chief executive John Ghent was recently named Enterprise Ireland’s high-potential start-up founder of the year, has developed a software-as-a-service (Saas)-based data-protection platform called PrivacyEngine which enables companies to achieve full compliance with regulations such as GDPR.

Mr Ghent, who founded Sytorus along with Mike Morrissey and Hugh Jones in 2013, would not be drawn on exactly how much the company is looking to raise outside of saying it was a “multimillion-euro fundraise.” However, industry insiders speculated the completed round total could go as high as €7 million.

Sytorus, which employs more than 50 people and has more than 300 fee-paying clients, is to use the new funds to open an office in Frankfurt. The company, which also has offices in Stockholm and London as well as Dublin, has seen big increase in business on the back of the General Data Protection Regulation (GDPR), which came into effect in late May.

“GDPR represents the biggest overhaul of the world’s privacy rules since the birth of the internet. Kernel Capital are delighted to announce details of this significant investment which will drive the business to new frontiers and accelerate their growth into several new markets.” said Orla Rimmington, a partner at the venture capital fund.

Other backers of Sytorus include Enterprise Ireland and a number of unnamed private investors.

Mr Ghent would not disclose turnover for Sytorus but said annual recurring revenues were doubling every six months.

1 Who are Ireland’s 17 billionaires?
2 State subsidises public sector retirees to cover gap until State pension
3 My father in a nursing home wants to gift me his house
4 Richer countries must do more to tackle climate change, Thunberg tells Davos
5 Health insurance: Switch often for your financial wellbeing
Real news has value SUBSCRIBE