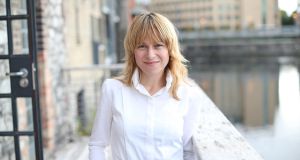 When Niamh Bushnell was preparing to pitch to investors for her company Idirus a few years ago, she was given some surprising, yet direct, advice from her business mentor.

“She said: ‘Niamh, act like a man and pull the numbers out of your ass.’ It was a real wake-up call for me.”

While Bushnell had been preparing her realistic figures based on what she knew she could achieve, her mentor, who was based at MIT in Boston, had a broader view of the situation: you’ve got to get the funding first, so think think big and show you think big if you want to get attention.

Bushnell has long since moved on from Idirus. After a spell as Dublin’s start-up commissioner, she set up TechIreland and now spends her time tracking the tech industry in Ireland.

But the lessons she learned and the experiences that are being shared by fellow entrepreneurs are feeding back into that work. Earlier this year, TechIreland launched the €100 million campaign, which aims to track €100 million in funding for tech companies led by women in Ireland.

It’s not an unrealistic goal to achieve. Last year, the final total stood just above €80 million. Already, TechIreland is tracking 40 female-founder companies with €1 million funding or more in Ireland. Alongside the €100 million campaign is the aim to increase the number of female founders with more than €1 million in funding from 40 to 100 and more.

There are plenty of conflicting figures about the funding that goes to women tech entrepreneurs, but TechIreland has one stipulation that is non-negotiable: companies need to have significant activity in Ireland.

“TechIreland is unique as a data service that tracks innovation in Ireland, so we’re in the prime position to track female funding throughout the year,” says Bushnell. “We also have strong relationships with many of the 313 female-founder companies currently profiled on our platform and we feel it’s a responsibility, a duty and an honour to track these companies’ progress and play our part in promoting seats at the funding table for female founders and cofounders.”

But the campaign is not just about the money. The plans is to use TechIreland and its data to introduce female founders to each other, and also to other companies and mentors, male and female, who may be able to advise them.

“It’s about encouraging women to seek co-founder roles in early-stage companies. It’s about encouraging more women to set up their own companies,” says Bushnell. “It’s exciting to see female-founder funding becoming a big topic in Ireland and while we have a good amount of early-stage funding for female founders, possibly the highest rate in Europe, our next challenge and proof point will be to show that female founders in Ireland can secure funding at all levels – above €1 million, €5 million, €10 million and up.”

Pinpointing the problem is not quite as simple. While some could argue that the firms are at an earlier stage – female-founded companies are statistically younger than their male-led counterparts right now, with the average founded year at 2012, compared with 2010 overall – there are plenty of anecdotes about founders being refused funding for all manner of spurious reasons.

Bushnell says she believes bias comes into it at some point, pointing to the figures for recently awarded Horizon 2020 funding, which showed a larger than average proportion of funding awarded to female-led firms engaged in deep technology and IP.

“Female founders looking for large funding rounds for their companies is kind of new, and there is bias there. I believe a lot of it is unconscious bias, but it’s there,” she says. “I think when you don’t feel like you have something in common, share a belief system and a vision with the person across the table with you, you just can’t go on that journey.”

Sharing that common ground is important for entrepreneurs too.

“Raising investment is not about convincing people that your idea/product is great, it’s about finding people with the same vision and beliefs and helping them cross the line. The rest is a waste of time. You want backers that believe in the same vision you do,” said Nuritas founder Nora Khaldi. “Very early on one needs to decide what company they want to build, a fast-growing one, or one that grows organically, the decisions and steps you’ll take after that one big decision will be very different.”

But often, there is an issue closer to home: the entrepreneur themselves and the level of confidence they have in their abilities. It leads to imposter syndrome, something that most – if not all – entrepreneurs feel at some point in their business, Bushnell says. But it can particularly hit women.

“Female founders feel that imposter syndrome much more keenly and it makes them less confident about putting numbers together to tell a bigger story, even if that’s what it takes to get to the other side and build that relationship with your investors,” she says.

Bushnell has, as mentioned, got some first-hand experience of running the gauntlet of funding for start-ups.

“If you’re out there raising money you really need to do your homework around terms and conditions and milestones,” she says. “The first two term sheets I got were really challenging.”

The number of companies with female founders getting a decent level of funding appears to be making progress. In the first half of 2018, TechIreland had nine female founders that raised more than €1 million each; last year, that figure was five at this point in the year.

“The thesis is simple: data favours companies with female founders, yet less than 10 per cent of venture dollars goes to companies with women on the founding teams,” says Andreea Wade, co-founder of Opening.io, an AI-powered engine that provides intelligent technology for CV databases and job platforms. “Failure to recognise this by the investment community is just bad business.”

A 2014 study by Credit Suisse showed that firms with more than one woman on the board performed better financially than those without female representation. A 2017 report by Morgan Stanley found that more gender diversity could increase productivity and lead to greater innovation and better decision-making.

“Supporting and investing in female founders isn’t charity. It is an investment opportunity that is constantly overlooked. A diverse founding team that understands all markets and consumers is critical to prevent groupthink, which limits a business’s potential,” she says. “More than that, studies have shown repeatedly that female leaders run more profitable companies. Investing in companies with female founders just makes business sense.”

It’s not across the board. Just because a founder is female it doesn’t mean they will have run into bias during their business career. Ríona Ní Ghriallais of Proverum Medical has a different view of it. “Ironically, I have co-founded a company to build a medical device that can only help men and I am nearly always the only female in the room when giving a talk or a presentation on the technology we have developed,” she says.

“But I don’t really think gender has much to do with it. The most important thing I have learned through this process is the power of determination – the determination to succeed on an unfamiliar pathway towards an ambitious goal. That is independent of gender.”

But there is groundwork being done for the future. About 17 per cent of tech companies in Dublin have a female founder or co-founder – a total of 191 companies; outside Dublin it’s in the region of 14-18 per cent. But companies are also fighting a geographical bias when it comes to funding; in 2017, TechIreland’s figures show more than 60 per cent of female funding went to Dublin-based firms. Take the €30 million funding for Kilkenny-based TransferMate, cofounded by Sinéad Fitzmaurice, out of the equation and that percentage jumps to 80 per cent.

So there are issues to tackle – and not just in Ireland. The start-up funding in the UK and the US is more often than not awarded to companies led by men. But the movement has begun – how quickly it moves remains to be seen.