Having software developers do IT maintenance is wasting billions of euro

Up to €258bn in potential global GDP is being lost each year, says research by Stripe 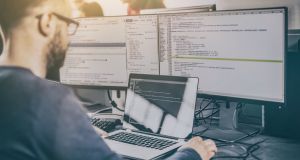 A worldwide shortage of software developers, together with a failure by businesses to use them effectively, is costing billions of euro each year, according to new research commissioned by Stripe.

The online payments company, founded by the Limerick-born Collison brothers, has calculated that as much as $300 billion (€258 billion) in potential global GDP is lost each year due to inefficient use of developers. Over a 10-year period, these losses could amount to €7.7 billion in Ireland alone, it says.

According to the research, there are an estimated 18 million developers in the world currently. However, with so many companies undergoing digital transformation there simply aren’t enough to go around.

But, while there is a global glut of developers, the study reveals that developers typically spend more than 17 hours a week working on everyday maintenance and infrastructure issues rather than core issues that will aid company growth.

In addition, developers are spending approximately four hours a week on working with bad code, which equates to nearly €73 billion worldwide in opportunity cost lost annually, according to Stripe’s calculations, which are based on average developer salary by country.

The research highlights the increasingly important role developers play in companies’ ability to innovate and scale, with access to talent now seen as a bigger constraint on a businesses’ ability to growth than access to capital.

It also reveals that 81 per cent of survey respondents believe in-house developers are more effective at making important company decisions than external consultants.

“The role of technology within an organisation has changed significantly, going from a nice-to-have to now being a business-critical function. With 79 per cent of business surveyed now considering themselves a technology company – no matter what industry they are in – developers have undeniably become some of the most important people in the building for any business,” said Iain McDougall, UK and Ireland country manager for Stripe.

“And yet, as this research shows, barriers do currently exist in many businesses to how much time and freedom IT leaders and developers have to innovate in the face of aging infrastructure and a shrinking talent pool. If this issue were to be addressed, it has the potential to significantly benefit the Irish, and world economy,” he added.

According to the study, both developers and C-level executives agree that artificial intelligence, Internet of Things, and application programming interface (API) services are having the biggest impact on their businesses currently, with machine learning, virtual assistants and blockchain likely to be impactful in the next 10 years.