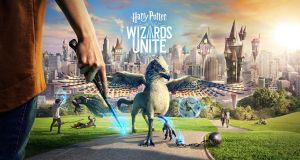 It’s the Pokemon Go of 2019. Harry Potter: Wizards Unite is Niantic’s latest augmented reality game offering and there’s a bit more to it than hitting up Pokestops to add to your Pokedex. The game appears to be set in the modern day: Harry Potter is all grown-up and working as an auror and Voldemort is long-defeated. The player is a witch or wizard tasked with keeping the wizarding world hidden from muggles.

As foundables (magical creatures or items) appear on your map, you must cast a counter-spell to defeat the confoundable spells trapping them in muggle reality. Much like Pokenmon Go there are activity hubs; these are inns, greenhouses, fortresses and magical traces where you can collect energy or set up lures to attract foundables.

There are also some nice touches for fans including the Ministry of Magic ID where you can add your house and wand type as well as take some selfies with wizardly filters. The game also allows you to pick a profession and brew potions, making it a little more engrossing than Pokemon Go.

The game is free to download for Android and iOS. Just don’t expect much if you are a rural dweller: once you get outside cities and towns, there are no inns and few foundables.