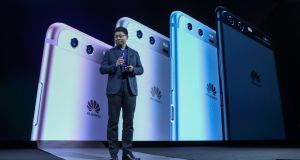 Huawei has announced two new flagship smartphones at a press conference in Barcelona, the day before Mobile World Congress officially gets under way.

The world’s third-largest mobile-maker after Apple and Samsung unveiled the new P10 and P10 Plus, which come in a range of new colours, an all-metal body, a 40 per cent boost in battery life and improved Leica-branded dual camera lens.

Replacing the popular P9, the new smartphone is expected to start shipping from next month and will retail for €649.

Ireland is not among the initial launch countries for the new devices.

Huawei is marketing the new smartphone aggressively as part of a campaign to take advantage of Samsung’s recent problems with the Galaxy Note 7, which the company was forced to withdraw last November due to battery issues.

Much of the focus of the press conference on Sunday was on the P10’s photographic capabilities.

“With Huawei P10 and P10 Plus, we have created a smartphone that revolutionises and redefines portrait photography,” Richard Yu, chief executive of the company’s consumer business group said.

“Thanks to the evolution of our partnership with Leica, camera users now have an incredible Leica front camera on their Huawei device in addition to the rear,” he added.

While the smartphone is likely to appeal to those thinking of switching over to Huawei, its lack of major innovations may disappoint those who have already been converted.

The company also launched the sporty Huawei Watch 2 on Sunday, which comes with the Snapdragon Wear 2100 chip and includes a heart-rate sensor, 4G LTE connectivity and GPS. The Watch 2, which will be available in Ireland when it launches next month, retails from €329.

Earlier in the day, LG kick-started what will be a busy week in Barcelona with the unveiling of its latest flagship, the G6.

Making a comeback meanwhile, was Nokia, which has resurrected the 3310, nearly 17 years after it first launched.

The new 3310 is being sold under licence by the Finnish start-up HMD Global.