Warning signs that big tech stocks may be perilously overvalued 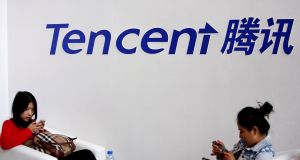 The wobbles suffered by technology stocks this week were not confined to Silicon Valley. Chipmakers across Asia had a dreadful Thursday, joining in a global sell-off of tech companies, while on the Hang Sang index in Hong Kong, Tencent Holdings endured its worst week in almost two years, declining 7.4 per cent.

The Chinese tech giant’s shares had surged in November, when it briefly joined the “$500 billion club” – the group of companies with market capitalisations that exceed half a trillion US dollars.

A quintet of tech stocks remain in the club: Apple, Google-parent Alphabet, Microsoft, Amazon and Facebook. Four of these (not Microsoft) are then joined by Netflix (with a market cap of $82 billion) to form the so-called Faang stocks. The acronym has been knocking around for some years, but the gains for this group in 2017 (to date) have been notably stellar.

Alphabet is the relative laggard with a year-to-date gain of more than 30 per cent as of yesterday afternoon, while Apple is up almost 50 per cent and Amazon, Facebook and Netflix more than 50 per cent. The story of the bull market is, to a large extent, a tech story.

It has been a volatile old week, however. The sea of red tickers generated by leading tech stocks on market boards on Wednesday might have turned green again the next day as a new rally kicked in, but yesterday they flicked red again.

It’s not, to be fair, the first wobble the sector has suffered this year, and Wall Street, being a fickle beast, may once again power on ahead, seemingly unstoppable, come Monday. But the underlying suspicion remains that many of the big names are perilously overvalued, that their earnings are vulnerable to shocks and that investors’ exposure across the globe won’t be pretty if it all hits the skids.