Cantillon: Those benefiting most financially may ruin Airbnb for those enjoying service 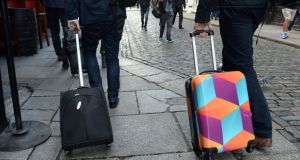 Oversight and regulation, not to mind the tax authorities, are encroaching on what started off for many as a fun way to earn a few extra bob. Photograph: Cyril Byrne

It was supposed to be a way to benefit from the “sharing economy”, to put your biggest asset to work by earning a bit extra from a spare room, or your entire home while you headed off to the sun.

Now, however, oversight and regulation, not to mind the tax authorities, are steadily encroaching on what started off for many, as a bit of a fun way to earn a few extra bob. And there may be a very real fear, that those who are benefiting the most financially from the house-sharing platform, will end up ruining it for those who built it up to what it is today, by bringing the arm of regulation to bear too forcibly.

Already the Department of Housing has come out with guidance, distinguishing between those who offer “homesharing” and commercial operators who are using the platform to move from long-term to short-term lets. The Revenue Commissioner has stated the tax liabilities that arise from the scheme, and An Bord Pleanála has upheld a ruling that apartments used for short-term lets may require change-of-use planning permission.

Now Dublin City Council is stepping up its oversight of the sector, issuing warning letters and upping its investigation of properties it suspects may be in breach of planning regulations by carrying out “unauthorised development” such as short-term lets.

Again, the concern of the council is most likely with those who are operating professional tourism businesses via the platform, without the appropriate planning permission. The Department of Housing guidelines suggest this includes those who let the property for more than 60 nights in a year.

But despite the rush to clampdown on short-term lets, it’s showing no signs of slowing down; indeed while listings for long-term rentals or houses to buy have dried up, short-term lettings are soaring, with more than 7,000 properties across Ireland for let on the platform today.

This could pave the way for the authorities here to adopt a stricter approach, along the lines of New York, which banned short-term rentals of less than 30 days. If this was to be the case, then the original adopters or “homesharers” will lose out, as will tourists, who very often prefer the flexibility of an apartment over a hotel bedroom.

Already some operators are going down the official route, seeking planning permission before they start operating a short-term letting business.

Maybe it’s now time for those who continue to side-step their obligations to do likewise.