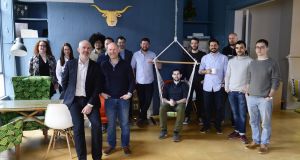 The NovaUCD-graduate company, which has been backed by Enterprise Ireland and American investment advice group the Motley Fool, was co-founded by Emmet Savage and John Tyrrell in 2013.

Its flagship product is an app called Invest, which is designed to make it easy for people to start investing from their smartphone by giving straightforward instructions on how to buy shares and clear choices on what shares to buy.

The company has recently launched its Learn by Rubicoin app, which is aimed at demystify the stock market. It guides new investors through the world of investing by giving jargon-free lessons and allowing users to take control of their financial future.

The firm also collected the Best Digital Start Up award.

Dylan Collins was presented with the Digital Hero award for the second time following his win in 2011. His latest company SuperAwesome is aimed at child safety online.

Other notable winners include Best Campaign for Toyota FaceItDown; Best in News, Publishing and Entertainment for Darkness into Light; and Best Use of Video for Centra Live Well Campaign.

1 In six months we will be in the grip of a 1980s-style recession
2 Angela Merkel sweeps in to save the euro zone
3 Property price drop of up to 12% this year a ‘reasonable’ assumption – McDonagh
4 Chartered Land moves closer to approval for Dublin’s tallest tower
5 Donohoe warns of cost of pandemic as budget deficit swells to €6.1 billion in May
Real news has value SUBSCRIBE