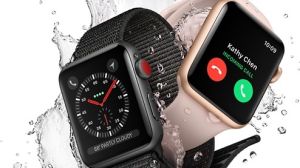 Not convinced about smartwatches? Apple is still betting it can change your mind. Apple Watch is now up to Series 3 and while it hasn’t been the instant mass success people assumed it would be, each version has steadily improved on its predecessor. The same is true of Series 3.

On the face of it, the Series 3 Apple Watch looks almost indistinguishable from last year’s version. Under the hood is where all the changes take place, from an improved chip to better exercise tracking.

But while the company has made some major leaps for the latest version of its product, Irish customers will, for now at least, miss out on the biggest change.

For a select amount of countries – the US, Canada, Australia, the UK, France, Germany and Japan, among others – there are two options: GPS and GPS with cellular. Irish customers can only officially buy the GPS version. Even if we use the usual workaround – buy it abroad, or even in the UK, and bring it home – it won’t work. The LTE capability of the watch requires the networks to be on board too, and no networks here have yet been announced as supporting or offering Apple Watch plans.

Because, as you might expect, such a function is going to cost you a little more. In the UK, EE is offering the data plans free for six months and £5 a month for 10GB after that. In the US, it will cost you at $10 a month for a watch plan. And there’s no roaming available on any of the watch plans as yet.

Is LTE essential? No. It’s nice, but not a deal breaker, and given the extra cost, something we can probably live without. The Apple Watch has far more useful things to offer than the ability to mimic your phone. Plus that LTE capability also comes at an additional cost: your battery life. You’ll get longer out of the watch without LTE sucking the battery power, and that, in my opinion, is worth more than being able to leave your phone behind for a run but yet still be contactable.

If you had Series 1, the latest watch is worth the upgrade. It’s faster, the battery life is better and it is water resistant so you can take it swimming. Series 1 wouldn’t die if you got caught in the rain, but I wouldn’t risk it in the pool. Series 3 will stand up to most stuff (unless you throw high velocity water into the mix), so that’s an instant benefit there.

The new version also has an altimeter built in, so you can track your exercise a little more accurately – or answer the burning question of how many flights of stairs you climbed in a day.

The new S3 chip is faster than before. Put this beside the original Series 1 and you’ll see a marked difference in speed. The display is also brighter and seems crisper than before, and when you team it with the new OS, Series 3 is just easier to get to grips with.

However, Series 2 owners, without the LTE capability, may find it more difficult to justify the cost of a new watch so soon.

The battery is far better in the latest series than the previous two. It’s not a case of charging every day any more, although you’d be hard pressed to get more than two days out of it.

The cellular option is limited at the moment. Apple is signing up carriers in different countries, so you have to wait until Irish operators start offering Apple Watch plans before you can ditch the phone and map your number to your wrist.

Like its predecessor, the Series 3 is water-resistant and has a standalone GPS to track your exercises. It also brings in an altimeter into the mix, which gathers elevation data.

One thing the GPS-only version cuts down on is storage space: 8GB to the cellular’s 16GB. Will you miss it? Again, probably not.

If you’ve been holding out on the Apple Watch, or an early adopter looking to upgrade, Series 3 is a good bet.

1 How to gift your child a house deposit . . . tax free
2 BOI customers to be charged twice with bank fees on New Year’s Eve
3 Son putting elderly dad under pressure to sign over land
4 Workers have little idea of the cost of retirement income
5 Digital bank N26 targets one million customers in the Republic
Real news has value SUBSCRIBE