Climate change, Irish style: it was the Greens wot dunnit 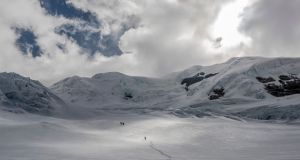 As conspiracy theories go, this must rank as one of the more absurd. According to the Irish Farmers’ Association, the reason why Ireland is careering into a series of hefty fines for failing to meet its climate targets in 2020 is John Gormley, the erstwhile leader of the Green Party.

According to the IFA’s environment chairman, Thomas Cooney, Gormley was responsible for signing the State up to unachievable targets back when he was environment minister between 2007 and 2011.

It is now “clearer than ever that the bad climate deal done by former environment minister and Green Party leader John Gormley will result in Ireland having to pay millions of euro of fines for breaching its renewable-energy and climate obligations,” Cooney said in the wake of another Environmental Protection Agency report, highlighting the fact that greenhouse gas emissions are now rising in every sector of the economy.

The logic of Cooney’s argument is that if only Gormley had been less ambitious, Ireland wouldn’t be in this mess.

Of course, what he’s really saying and what the Government has argued in Brussels for years is that agricultural activity here, the largest carbon emitter, should be given special treatment because of its national importance and because Ireland doesn’t have a history of heavy industry, unlike other European countries, which caused much of the problem in the first place.

He neatly sidesteps the fact that emissions are rising in other sectors, such as transport; that the State had effectively no climate mitigation policy in place for five years between 2012 and 2017; and that the bigger fines are likely to come from Ireland missing its renewable energy targets, which are no more onerous than those imposed on other states.

Either way, his intervention caps off a torrid few weeks for the Government’s new Department of Climate Change, which was established last year as an add-on to the environment and communications portfolios. First, it was bashed by the Citizen’s Assembly for essentially being all talk and no action. Then the State, and by extension the department, was fingered at the Bonn climate talks as the worst-performing country in Europe for tackling the issue.