Sale of securities will be done in two tranches 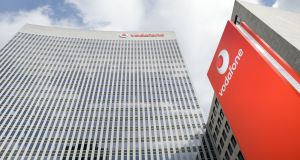 Vodafone plans to sell about €4 billion of securities convertible into shares to help fund its acquisition of some of Liberty Global’s European businesses.

The sale of the sterling-denominated securities will be done in two tranches maturing no later than March 2021 and March 2022, the company said in a statement, confirming an earlier Bloomberg report on the issuance plans.

Bank of America, BNP Paribas, HSBC, JPMorgan Chase and Co and Morgan Stanley have been selected to work on the transaction, people familiar with the matter said on Monday, asking not to be identified as the details aren’t public.

“There hasn’t been much issuance in Europe recently so this deal may be well received by investors if it comes with attractive terms,” said Ivan Nikolov, portfolio manager at NN Investment Partners. “Vodafone is one of the stronger issuers in the convertible universe.”

A transaction of this size is rare for investment banks in the region this year, with volumes of share sales lagging 2018. Companies and their shareholders in the continent have raised $5.9 billion (€5.2 billion) from stock sales year-to-date, a fraction of the approximately $21 billion worth of stock sold in North America and Asia, according to data compiled by Bloomberg.

Vodafone agreed to acquire Liberty Global’s German and Eastern European units for $22 billion last May, saying at the time that it would sell about €3 billion of convertible securities to help fund that transaction.

Chief executive Nick Read suspended a pledge to keep dividends growing as the company tries to rein in debt after the deal. He is also attempting to partner with rivals in an attempt to cut costs as service providers build infrastructure for fifth-generation wireless networks.