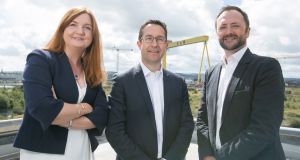 Belfast-based B-Secur, which has developed a technology that can securely identify an individual from their heartbeat, has raised £4 million (€4.66 million) in funding as the company seeks to expand.

The latest round of funding includes backing from Accelerated Digital Ventures and Kernel Capital, manager of the Bank of Ireland Kernel Capital Growth Funds, both of which supported B-Secur in the past. The new investment brings to £10 million (€11.6 million) the total investment in the company.

“This is the second time both have invested,” B-Secur chief executive Alan Foreman said. “It’s an extremely positive sign that we have done something right.”

B-Secur plans to develop its product further and add to its commercial team in the coming months. Although the company is planning to expand its staff outside the borders of Ireland, following where its customers are located, Mr Foreman said the high-value jobs – its product development – would remain on the island of Ireland. At present, there are 36 staff employed at the business; Mr Foreman said he plans to add a further eight.

B-Secur’s technology uses the unique electrical signal of an individual’s heartbeat (ECG) as personal authentication. Its HeartKey product, which it unveiled at the CES technology exhibition in Las Vegas earlier this year, combines user identification and advanced physiological monitoring for health and wellness, with medical grade heart rate, stress and fatigue monitoring.

“We are going to further develop out the technology,” explained Mr Foreman. “We are building our technology into cars and health tech; we need to do a lot of testing.”

The technology provides a more sophisticated option than the first generation of biometric identification, such as facial scans or fingerprint readers. “Not only can it identify you from everyone else on the planet, we can also tell how well you are,” Mr Foreman said. He pointed to driver fatigue, which is responsible for about 25 per cent of road deaths. B-Secur’s technology can detect fatigue a few minutes before it becomes dangerous, offering the opportunity to avert accidents.

The technology can also be used in wearables, and has the potential to aid the health system by taking people out of the hospitals for routine monitoring, Mr Foreman said. The company is teaming up with top motoring manufacturers, global wearable and fitness tracker technology businesses, along with semiconductor manufacturers, to embed HeartKey into products.

“We have got a number of early customers, and that has gone crazy since we went to CES,” he said. “We got a lot of attention.”

Mr Foreman said securing further investment was recognition of the company’s rapid development over the past 18 months, along with the market relevance of B-Secur’s technology.

“Most importantly, it’s a strong indicator of B-Secur’s growth potential on a global scale,” he said.