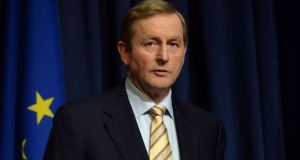 The State’s current and former data watchdogs have said former taoiseach Enda Kenny did not lobby them to take a softer approach on regulating internet privacy covering personal data on behalf of Facebook.

Helen Dixon, the Data Protection Commissioner since 2014, and her predecessor Billy Hawkes said that neither Mr Kenny nor his officials while he was taoiseach from 2011 to 2017 sought to influence the regulation of data protection rules to the benefit of the social media giant.

The current and former data regulator were responding to reports in the Observer and Computer Weekly that Mr Kenny helped the web company influence EU data protection laws.

The articles, based on internal Facebook documents, claimed that Mr Kenny offered to use “significant influence” of the EU presidency in 2013 to lobby other EU member states on EU data protection laws, promoting Facebook’s interests, “even though technically Ireland is supposed to remain neutral in this role”.

The documents singled Mr Kenny out as one of the “friends of Facebook”. The reports also claimed Facebook targeted legislators and regulators to provide influence around the world.

Mr Kenny did not respond to a call seeking a comment.

“We can categorically state that Enda Kenny’s office did not lobby in relation to this,” said a spokesman for Ms Dixon, whose commission is the de facto EU-wide data regulator through new EU data laws passed last year.

“There was never any interference by the government when I was commissioner, neither in relation to Facebook or any other company,” said Mr Hawkes.

A spokeswoman for Facebook Ireland said the documents referred to in the articles were sealed in a California court in a legal action taken against Facebook by app developer Six4Three and so it was not able to discuss them. She said the documents “by design tell one side of a story and omit important context”.

On Monday evening, Mr Varadkar sought to play down claims that Mr Kenny offered to help Facebook with the GDPR law.

“We totally beefed up the role of the Data Protection Commissioner when Enda Kenny took over as taoiseach,” he said.

“ It was a small, under-resourced office headquartered over a Spar and he really took that on and expanded it.

“They have confirmed that they never received any lobbying on behalf of Facebook or any other company by Enda Kenny as taoiseach.”

Labour leader Brendan Howlin described the reports as “profoundly worrying” and called for a “very full explanation of exactly what was understood by Facebook and what undertakings did Enda Kenny as taoiseach give them”.

Fianna Fáil’s science spokesman James Lawless TD called for an explanation from Mr Kenny on his willingness “to bat for Facebook” and “a tangible gesture of intent from government that they are serious about appropriately dealing with the giants operating within social media”.

Irish media reported almost two years ago that Ms Sandberg raised concerns with Mr Kenny in correspondence shortly after their January 2014 meeting in Davos that changes to privacy laws might lead Facebook to consider “different options for future investment and growth in Europe”.

She commended Mr Kenny for making “enormous progress” in the area of European data protection regulation during the presidency of the EU, telling him that “you and your staff really internalised our concerns and were able to present in a reasonably way, which has had a positive impact”.

In correspondence after their January 2017 meeting, Ms Sandberg told Mr Kenny that their meeting was “one of the highlights of Davos every year”.

“We continue to appreciate Ireland’s leadership in Europe – the role you play has never been more important,” she said in the letter released to The Irish Times under the Freedom of Information Act.

She praised the government’s increased funding for the data protection commissioner.

Mr Kenny responded by letter, telling Ms Sandberg that his department and IDA Ireland, the company responsible for inward investment, would “follow up on the matters discussed; in particular I have noted the continued importance of data privacy as an issue for you and other technology companies”.