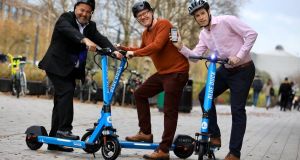 US electronic scooter operator Blue Duck is to pilot technology developed by a Dublin City University-based consortium that promises to solve the problem of bad scooter parking.

One of the many issues arising from the rollout of shared scooter schemes in cities around the world is that users typically dump the vehicles on footpaths when they are finished with them, leading to clutter and potential safety hazards.

Many cities are belatedly responding to this by introducing parking regulations that leave scooter scheme operators having to ensure that vehicles are parked correctly but existing GPS technology isn’t great at locating exactly where a scooter may have been left. Luna is a telematic device that solves this particular issue.

While the technology has been around for years it is only recently that it has become affordable for small micromobility vehicles such as scooters.

Blue Duck, an e-scooter scheme provider focused on Texas and the southeastern United States, has agreed to pilot the technology on DCU’s private road campus.

“We were excited to learn about Luna’s centimetre-level GPS technology when it was announced two months ago. That level of precision would allow us to locate our scooters more efficiently and would lead to stricter compliance with geofencing requirements,” said Blue Duck chief executive Michael Keane.

“A successful outcome of this pilot test could lead to significant enhancements to our ability to manage our fleets responsibly while providing exceptional service to our partners and riders,” he added.

Luna chief executive Andrew Fleury said he hoped to see widespread adoption of the technology by e-scooter providers, adding that there could also be other use cases for the solution.

“Electronic scooters have exploded in popularity all over the world but they are causing havoc because people either don’t know how to park them or aren’t parking them well. To be able to pinpoint where they are to centimetre-level accuracy means that shared scooter operators can tell if a vehicle in on the middle of a footpath or in a correctly parked area. The technology also appeals to authorities as well because they can see the shared schemes are being run properly,” said Mr Fleury.

“We’ve also a bunch of industrial applications for Luna that could see it being used in airports, shipping ports and so on as well,” he added.

Jamie Cudden, smart city programme manager for Dublin City Council, said he was keen to see the data gleaned from the pilot programme to see how it might be used to assist integration of micromobility vehicles into the capital’s transport system.

Currently, e-scooters remain prohibited from public roads in the Republic with users facing fines and the potential seizure of the vehicles.