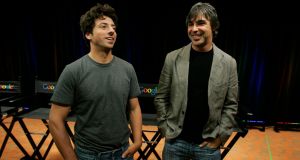 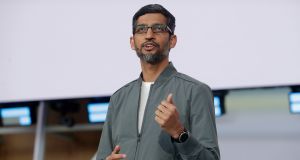 Sundar Pichai, who has been leading Google as chief executive for more than four years, will stay in his role and also become chief executive of Alphabet. File photograph: Jeff Chiu/AP Photo

The co-founders of Google are stepping down as executives of its parent company, Alphabet.

The move ends a remarkable two decades during which Larry Page and Sergey Brin shaped a start-up born in a Silicon Valley garage into one of the world’s largest, most powerful – and, increasingly, most feared – companies in the world.

Mr Page was Alphabet’s chief executive, while Mr Brin was its president. The president’s role at Alphabet is not being filled.

Both founders promised they plan to stay actively involved as board members and shareholders, and lauded Mr Pichai for his leadership of Google.

Mr Page and Mr Brin, in announcing the news on Tuesday, said the company has “evolved and matured” in the two decades since its founding.

Alphabet – an umbrella corporation that the two created in 2015 – still boasts Google as its central fixture and key moneymaker. It is also made up of what are known as “other bets”, or long-shot projects. These include drone company Wing, and self-driving car firm Waymo.

Mr Page and Mr Brin both have been noticeably absent from Google events in the past year.

Both stopped making appearances at the weekly question-and-answer sessions with employees, and Mr Page did not attend this summer’s Alphabet shareholders’ meeting, even though he was still in the chief executive role.

Alphabet has been positioning Mr Pichai as the de facto leader for quite some time – making him the top executive voice at shareholders’ meetings, on earnings call and as a spokesman at congressional hearings.

Mr Pichai (47), has worked at the company for 15 years, serving as a leader in projects to build the company’s Chrome browser and overseeing the Android operating system.

Mr Pichai, who has an engineering background, took over as the head of Google’s products before being promoted to chief when Alphabet was created. – Associated Press

Only half the homes needed this year will be built, construction event told 17:35
Draper Esprit to raise £100m through placing 17:30
Ireland can learn from German economic response to Covid-19, says Paschal Donohoe 17:27
Ryanair tells Minister it will close Cork and Shannon unless EU travel plan is adopted 17:17
Technology giant Google pledges $1bn to pay for news 16:31

1 Will your boss let you work long-term from home – or from abroad?
2 House asking prices rebound but will likely fall again - MyHome
3 Revolut shifts regulation of Irish customers to Lithuania
4 AA Ireland bought by Olivier Sarkozy-led fund for over €200m
5 Google tells workers to return to country where they are employed
Real news has value SUBSCRIBE