Company founded as a partnership between State Street, Insigma and Zhejiang University 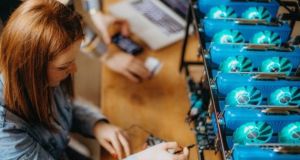 The new roles are across a number of areas, including artificial intelligence, data analytics and blockchain

Chinese technology services company Horizon8 is to create up to 50 jobs with the opening of a new European headquarters in Cork.

The company, formerly known as HengTian, was founded in 2004 as a partnership between US financial services giant State Street and Hangzhou-based Insigma Technology and Zhejiang University.

The Cork facility marks the company’s first office in Europe. The Hangzhou-headquartered group also has a presence in Boston, as well as subsidiaries in Shanghai and Hefei in eastern China.

Speaking to The Irish Times, Patrick Horgan, managing director of Horizon8 in Europe, said the new roles would be across a number of areas, including artificial intelligence, data analytics and blockchain.

He said the decision to base the new office in Cork was partly a result of its longstanding relationship with University College Cork, as well as access to “a deep talent pool”.

Mr Horgan added that the new office would allow the company to better serve its growing international client base.

The new investment is supported by the Government through IDA Ireland.

“The addition of Horizon8 to the cluster of tech companies that are already established in Cork is very welcome and further strengthens its reputation as a vibrant tech hub in Ireland,” said Eileen Sharpe, divisional manager of growth markets at the State agency.