Action camera is easy to use, rugged and has plenty of features to keep most people happy 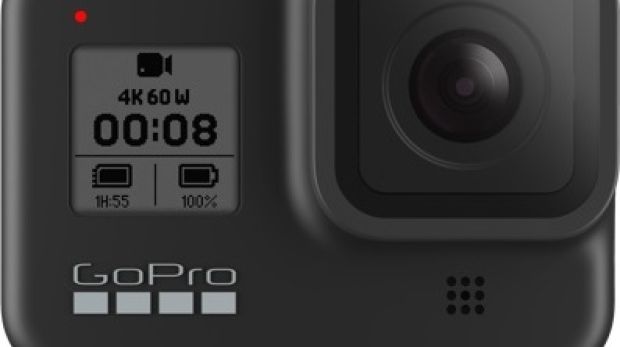 GoPro Hero 8: Easy to use, with excellent footage, this is GoPro at its best

It wasn’t too long ago that GoPro was the only realistic option for action cameras. Hardy with a range of mounts and cases that made it suitable for extreme sports, it quickly became a common sight anywhere from ski slopes to surfboards and city cyclists.

But competition has become increasingly fierce. Cheaper action cameras at the lower end of the market may have been a more attractive option for those who didn’t want to spend a large amount of cash on something that could end up lost or damaged.

And at the top end, competitors such as dronemaker DJI have turned up the heat for GoPro with the Oslo Action.

For a while there, it seemed as if GoPro may not survive, driven to the brink of bankruptcy. But then came the Hero 7 and, with it, a return to profit for the company.

So how does the Hero 8 compare? The good news for GoPro fans is that it is another solid product and a worthy replacement for the Hero 7.

Starting with the design, this is one of the most compact GoPro Hero cameras to date. It has been slimmed down in size, but not in features, and will stand up to some extreme conditions (and butter fingers). The frameless design isn’t just an aesthetic choice; it is much easier to slip in your pocket. There is no need for any extras to mount the camera, or to make it waterproof, with the Hero 8 Black able to submerge to 10m without a case.

There is built-in GPS too, and the ability to control the camera with voice commands, although the latter wasn’t used as much in this review. How it performs under more difficult conditions – up a windy mountain, or while barrelling down a ski slope at speed – will be the real test. Unfortunately (or fortunately, depending on your outlook), such conditions were in short supply during this review.

But back to what the GoPro is best at: recording video. You have a choice of three options: video, time-lapse and photo. Footage from the camera is excellent. That is partly due to the 4K60 footage you can get out of the Hero 8, and partly due to the image stabilisation, with HyperSmooth proving to be the MVP for GoPro. It’s across all video modes now, and you have an additional choice of high or boost mode for HyperSmooth too.

That excellence extends to other modes too. If you want time-lapse videos, the Hero 8 includes Timewarp 2.0, so any moving videos will be stabilised and smooth instead of a shaky mess.

The 12 megapixel sensor will capture some good still photos too.

There are four options to choose from. Photo is fairly straightforward as you would expect; burst shoots at 30 frames per second; live burst will take 1.5 seconds of footage before and after your photograph to help you capture more difficult shots; and night, which slows down the shutter to capture low light images.

SuperPhoto was my preferred mode – it automatically chooses the best settings to process your shot – but the Hero 8 also offers HDR. If you are feeling a little more adventurous you can shoot in RAW as well as JPEG and do your own processing.

Once you have your images and videos safely captured, you can edit them on the camera. However, while it’s perfectly possible, editing on camera is a little fiddly.

The battery is still removable, so you can carry extras if needed and easily swap them out.

The good
The Hero 8 is neat, rugged and has plenty of features to keep most people happy. If you are a complete beginner, there are presets to make sure you get the best video footage possible, with slow-mo, cinematic and activity among the choices.

The not so good
If you were hoping for a fold-out display, you’ll have to wait a little longer – or fork out for the add-on.

The rest
If you need any extra bits, the Mods – display, media and light – will add new features such as an audio boost and extra lighting.

The verdict
Easy to use, with excellent footage, this is GoPro at its best.

What will Bauer do with the Irish radio stations it picks up from Denis O’Brien? 13:44
Irish lawyer to become first woman to lead Linklaters LLP 13:40
Me & My Money: ‘I prefer to shop local, mainly to help local communities’ 13:25
EU agrees to avoid escalating tariffs row with US 13:23
June hearing set for An Taisce’s bid to appeal rejection of Glanbia challenge 12:52

1 Empty offices on Mondays and Fridays spell trouble for businesses

3 What will Bauer do with the Irish radio stations it picks up from Denis O’Brien?