Weblog: Ireland’s 2016 obsessions revealed in our year of Google search 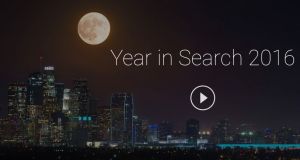 Know their search history and you will know a nation’s people. Google’s Year in Search reveals what the Irish were thinking about in 2016. We joined the world in mourning the loss of several great public figures but we did beat the Kiwis (and got them back for the terrible lashing they gave us in 1905); Bowie, Prince, Alan Rickman, Anthony Foley and Leonard Cohen were the most Googled losses while Ireland vs New Zealand came third in sports after Euro 2016 and the Olympics.

We were busy searching for politicians too: no prizes for guessing that Donald Trump was the most Googled, followed by Hilary Clinton, Bernie Sanders, Theresa May and Jo Cox. Enda didn’t even make the top 10.

Pokemon Go has us the most confused but we were also wondering what the devil Brexit was and scratching our heads over a hung Dáil as well as those pesky Eircodes. We were also using Google search to cook up a storm but nothing fancy for us: spaghetti bolognese is grand, thanks, apple tart for after and something vegetarian for the young one.