Analysis: Telecom firm has 14 million subscribers but €5.9bn in debt 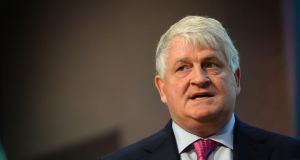 As he briefed bond investors this week on the “substantial risks” facing Denis O’Brien’s Digicel, CreditSights debt analyst Michael Chakardjian evoked punk band The Clash in his presentation entitled: “Should I stay or should I go now?”

In a burst of irreverence worthy of the band’s anarchic lead singer Joe Strummer, Chakardjian then stuck his boot into the Caribbean telco, which was once O’Brien’s biggest cash cow.

Chakardjian believes Digicel, which has 14 million subscribers but is creaking under a $6.2 billion (about €5.9 billion) debt mountain, is “stressed”.

He attributes this to a powerful cocktail of currency risks, economic threats and “cash burn” due to declining revenues from mobile calls and the ongoing need to pump cash into its fibre network.

O’Brien has turned to consultants McKinsey and Goetzpartners to help plot a way forward.

Chakardjian suggested Digicel’s debts may be “unsustainably high” and advised bondholders to sell some of their holdings.

While he believes it has a long-term future, there are “a substantial amount” of near-term risks. Digicel “fundamentally disagrees” with him.

The analyst identified four separate threats facing the company, which O’Brien tried and failed to float on the stock market 14 months ago.

Firstly, Chakardjian calculated there is “limited to no equity cushion”, with a debt more than six times its earnings.

He is suggesting here there is currently little value over and above what it owes lenders. If Digicel were a house, it would effectively be on the verge of negative equity.

Secondly, he is sceptical about the company’s plan, dubbed Project Swan, to hack back costs to boost margins.

Digicel told bondholders it will quickly take out back office and structural costs to revive earnings, while it waits for revenues to grow on the back of recent major investments in fibre.

Management expects to staunch the near double-digit fall in its adjusted earnings over the next six months, which the analyst says is “highly ambitious”.

“If executed, it would be fantastic,” Chakardjian says, before criticising the plans as “opaque” and giving rise to “notable concerns” for bondholders.

“By their own admission, the company is trying to do something they have never done before . . . we believe management’s deleveraging plan comes with substantial execution risk.”

The third stick with which he beats Digicel is its prospects for revenue growth. Voice calls account for more than half its income but, like the rest of the industry, are falling fast. Data, fibre and cable are currently not growing fast enough to plug the gap.

Finally, it is suggested that some of Digicel’s fate is outside of its control. Beyond normal competitive threats that come with operating in risky market, Digicel faces enormous currency headwind.

Its debts are in US dollars, but it is trying to pay them off in weakening currencies from Haiti, Papua New Guinea, and Jamaica.

It is running to stand still on its debts. Chakardjian identifies the falling kina from Papua New Guinea, one of Digicel’s three most important markets, as the biggest risk.

Papua New Guinea’s public finances are in trouble, and it may need a bailout from the International Monetary Fund (IMF).

If so, it could be forced to devalue the kina, which would have instant negative repercussions for Digicel.

Digicel is split into two main companies – an opco (operating company) that owns its Caribbean units, and a holdco (holding company) into which it has also hived Papua New Guinea unit.

Chakardjian believes the risks associated with the debts of the holdco are “more pronounced” because of Papua New Guinea.

Digicel maintains that the heaviest portion of its debts don’t start maturing until 2020, however, there it still needs to find $291 million to repay debt in the next eight months.

Digicel has financed much of O’Brien’s activities in recent years, churning out $1.1 billion in dividends between 2013 and 2015 alone.

That tap has been switched off to sate bondholders, however, forcing O’Brien to look elsewhere for cash to finance his activities.

In the song, the Clash line evoked by Chakardjian is followed by a prediction of a dire Hobson’s choice: “If I stay there will be trouble/If I go it will be double...”

For O’Brien, the stakes have never been higher.