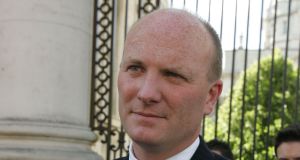 Declan Ganley has alleged the contest for a state mobile contract in Mexico was effectively rigged to exclude his company.

Rivada Networks, the telecom company owned by Galway businessman Declan Ganley, has won a court bid to force testimony from an adviser to the Mexican government over a disputed $7 billion (€6.7 billion) state mobile contract.

A court in South Carolina has granted Rivada an order enabling it take a deposition from a US-born consultant, Richard Keith, in relation to the disputed Red Compartida contract.

Rivada claims it was unfairly excluded at the eleventh hour from bidding for Red Compartida, which is a state-backed contract to build a wholesale mobile network to enhance competiton in the Mexican market.

The contract was awarded last month to Rivada’s only bidding rival, the Mexican-led Altan consortium. Mr Ganley has alleged the contest was effectively rigged to exclude his company, and has launched court action in Mexico.

Mexican officials and Altan have denied any wrongdoing.

Prior to final bidding, Rivada alleges, Mr Keith advised Mexican officials on how to assess Red Compartida bids, and produced a supposedly secret document that outlined the standards of the ideal business model.

Mr Ganley’s company alleges in court filings the document found its way to Altan, which allegedly used it as a “cheat sheet” to inform its own bid.

A South Carolina court this week granted Rivada permission to depose Mr Keith and hand over drafts of related documents.

AIB hires Alantra to sell British small business loan book 05:17
Post-Covid how can businesses prepare for the next big disruption? 05:00
Davy faces scramble to hold on to clients as top executives resign 04:00
Mining in Ireland has key role in ensuring sustainable future – geoscientists warn 00:01
‘The robot vacuum cleaner is the best money I’ve spent in a long time’ 00:00