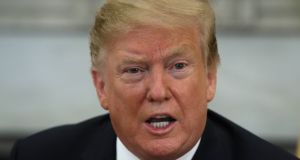 The Trump administration is taking steps to ban Huawei equipment from its 5G networks, and has been urging allies to do the same, warning that it could be used by Beijing for spying.

Donald Trump will threaten to limit intelligence sharing with the UK if the British government allows Huawei to build part of the country’s 5G mobile network, a message he plans to deliver in person during his visit to London next week.

British and American officials said on Thursday that the US president had decided to raise the issue during his three-day visit to Britain after repeated efforts by his aides failed to convince some in the UK government to block the Chinese equipment supplier.

The Trump administration is taking steps to ban Huawei equipment from its 5G networks, and has been urging allies to do the same, warning that it could be used by Beijing for spying.

It has become one of the most sensitive bilateral issues between Mr Trump and Prime Minister Theresa May in recent months because of signs Britain was moving towards allowing Huawei to bid for the UK’s next-generation mobile network. One White House official said Huawei would “obviously be on the agenda”.

Another person involved in planning the trip said Mr Trump was ready to make his objections known both in public and in private. “The president is preparing to repeat the message that Chinese involvement in 5G could pose significant challenges for US-UK intelligence co-operation. He is prepared to go hard on this issue,” the person said.

Last month, leaked reports from the UK’s National Security Council suggested ministers were prepared to allow Huawei to build noncore parts of its 5G data networks, despite the frequent warnings from Washington. But US officials hope they still might be able to persuade Mrs May to overturn that decision.

John Bolton, the US national security adviser, said on Thursday that the British government had not reached a final decision about Huawei’s involvement. “These are the sorts of things you can’t resolve in one meeting,” he said. “The discussions continue - I’ve been in conversation with Mark Sedwill [head of the UK civil service] about this frequently – and I’m sure they will go on.”

Mr Bolton added that the US was prepared to accept “zero” risk allowing Huawei into its own national 5G infrastructure.

The US has signalled it was preparing to reassess intelligence sharing over the Huawei issue before, though Mr Trump’s threat would be a significant escalation, according to experts, especially if he decides to go public with the warning.

Shortly after Washington ordered its Huawei ban, Robert Strayer, a senior state department official, warned: “If other countries insert and allow untrusted vendors to build out and become the vendors for their 5G networks, we will have to reassess the ability for us to share information and be connected with them in the ways that we are today.”

Mr Trump’s direct intervention while in London would give ammunition to those in the UK cabinet who want to take a harder line towards the Chinese company.

“He wants to make it clear that the China 5G issue is very damaging as far as the US is concerned,” said Nile Gardiner, a foreign policy analyst at The Heritage Foundation think-tank in Washington.