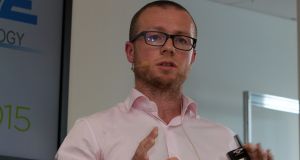 The news comes as the entrepreneur-led venture capital firm announced its participation in a €1.1 million funding round for Ambisense, in a funding round led by Atlantic Bridge.

Suir Valley has been a strong supporter of Irish start-ups in recent years, with companies such as Wia, Nova Leah, War Ducks, ProVision, Artomatix and VR Education among its portfolio.

Announcing its participation in the funding round for Ambisense, Suir managing partner Barry Downes said he could easily see the VC joining with Atlantic Bridge on future investments.

“For most of the deals we have done in Ireland, we’ve partnered local VCs and I think Atlantic Bridge is a particularly good match for us as they focus on spinning out companies from universities, which we are very keen on. I can see us engaging in more and more opportunities with them and, in fact, we are currently looking at a number of opportunities with them,” he said.

Ambisense, an IoT and AI environmental analytics company, is a spin-out from Dublin City University that designs low-cost instruments to monitor quality levels of gas and air.

Founded in 2014, the company’s platform combines information from remotely deployed field devices with contextual data sources such as weather, satellite, geophysical and operational data to build machine-learning models. These models identify the relationships, patterns, and drivers hidden within the data, allowing customers to forecast and predict the behaviour of targeted environmental pollutants.

A former finalist in the Irish Times Innovation Awards, the company, whose clients include Cemex, SGS, and CRH subsidiary Tarmac, primarily works across industry, oil and gas and waste management.

Ambisense previously raised €1 million from the Atlantic Bridge University Fund and Enterprise Ireland in 2017. Chief executive Stephen McNulty said the company was delighted to secure Suir’s support and was keen to gain its expertise as it looks to grow into a globally recognised company.

Mr Downes, who praised Ambisense as “a leading innovator in within the environmental space”, said Suir expected to announce a further five investments in Irish tech start-ups before the end of the year with a similar number of deals forecast for 2020.

The entrepreneur sold Feedhenry, the Waterford-headquartered mobile software developer that he founded in 2009, to US multinational company Redhat for more than €60 million, in 2014.

Sure Ventures, an investment company founded by Mr Downes in 2017, listed on London’s specialist funds market early last year. It has used proceeds from that flotation, along with backing from Shard Capital Partners, to invest in Irish start-ups through Suir Valley Ventures.

Isabelle O’Keeffe, who joined Suir last year as principal from Schibsted media group in London where she was ventures and investment associate, said some great Irish companies had been founded on the back of the economic downturn, with many entrepreneurs still coming through despite the recovery.

“A good friend said to me that you no longer judge a city’s prosperity by the number of cranes but by the number of co-working spaces it has. Using that metric, it would seem that things are good in Dublin right now,” she said.