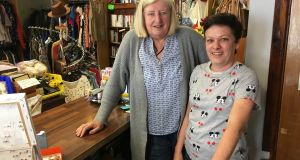 Mary Kelly and Grainne Devine at the Friends of St Brigid’s Hospice Charity Shop on Leixlip’s Main Street. Devine believes Intel’s presence has had a positive effect on the town. Photograph: Mark Hilliard

In the early microchip capitals of the world, in Munich, Eindhoven and Boston, Irish emigrants were being tempted home.

“We’ll set up shop in the local Shamrock Bar,” said Pat Casey, human resources manager of Intel Ireland, the Californian computer company that had arrived with a bang and was busily completing its first plant in a muddy Co Kildare field in 1990. The ads, he announced, would say “Fáilte – Welcome Home.”

He was talking about was Intel’s early recruitment drive. The company set its sights cannily on Irish expats working with semiconductor technology abroad.

How do you better what was already a multimillion euro investment in a country starved of jobs? Bring home the bright young talent who had left Ireland to find one.

At the time, Casey said he envisaged the publicity surrounding the emigrant scheme would “be clipped [from newspapers] by mammies and daddies and sent to their kids abroad”.

At the end of the 1980s, Ireland was sketching a blueprint of economic transformation. Intel arriving with its promise of better times and a way home for Irish sons and daughters was delivering a master-class in PR, positioning itself as an emblem of an emerging nation and its possibilities.

It is now 30 years since the US chip giant made the decision to base its European manufacturing headquarters here. In those three decades, the company has evolved from a relatively small operation churning out PCs at a former used car dealership in Palmerstown, to employing 4,500 people at its Leixlip campus. To date, it claims to have invested €9.3 billion.

Between 1994 and 2004, Intel constructed three fabrication manufacturing facilities (Fabs) which, in 2014, were converted into a single operation – Fab 24 – at a cost of $5 billion (€4.4 billion), producing the latest in microchip technology.

Kildare County Council granted permission recently for the company’s latest proposed development, a new $4 billion (€3.5 billion) Fab. It is a statement of intent on the company’s future in Ireland. It holds the promise of up to 1,600 additional full-time positions and 6,000 temporary construction jobs.

In the community this week, the news was sinking in. One young mother, Niamh Murray, pushing her son Tadhg (3) down Main Street, explained that, for many, Intel’s long association with the town means such announcements stir little opinion.

“Intel is a huge employer so it’s kind of inevitable,” she says, recalling how her childhood home beside the plant was knocked down “to build more Intel. So it’s always been there.”

While the company’s technology can be lost on many, the economic dividends are certainly not. Despite questions over how much of the employment is local to Leixlip specifically, almost everybody you talk to knows somebody who works there.

Still, there is divided opinion on knock-on effects for local businesses.

At the the Friends of St Brigid’s Hospice Charity Shop on Leixlip’s Main Street, Gráinne Devine believes Intel’s presence has had a positive effect. “Leixlip needs companies like that,” she says, explaining that employees use local businesses. “That’s what keeps this town going.”

The shop has raised €600,000 for the hospice and a lot of the second-hand bric-a-brac they sell has been donated by American Intel staff leaving the State.

Not everyone is so upbeat though. Ali Ozbek, proprietor of Ali’s Turkish Barber’s, said he lost about a third of his business and had to let staff go when the Intel plant opened a barber shop on its campus. His argument is that it should have been local.

“We are only a small business here. Why not back someone in the village? Not only me, there are a few barbers in the town,” he says in front of notably empty chairs on last Thursday afternoon (Intel says the barber service was chosen through its standard vendor selection process and that it includes other services which may have affected the number of suppliers able to apply).

Most available economic data comes from the company itself. A recent study conducted on its behalf by PwC says Intel has had an average annual spend of €39 million on non-construction Irish subcontractors and “supported” 756 suppliers since 2007, spending about €187 million a year.

Its contributions to and engagement with the community are also well known. Something of a juggernaut of corporate goodwill, the company says it gives €1.3 million to education programmes annually and, in the last five years, has donated more than €3 million to the community.

Dermot Rowan, a farmer who lives in nearby Confey, has only good things to say, “because of employment, because it’s going to liven up this village”. Although he notes, like others in Leixlip, that there are traffic problems and perhaps more local jobs might have materialised.

One local business owner who has witnessed the area’s development calls it “a little sort of Silicon Valley in north Kildare”.

In the town, there is cautious optimism. On the old stone Rye Bridge, Rose Murrie says “anything is progress but what I worry about is that, in a few years’ time, we are left with a big white elephant up the road,” a reference to the economic reality that foreign companies sometimes leave.

Intel’s recent planning application noted that, from its experience with the existing workforce, future employees “will likely be drawn from the immediate hinterland as well as a wider geographical area”.

There is political and community engagement. Local councillors are regularly briefed and businesses form part of a “community advisory council”. Intel is a member of the Kildare Chamber of Commerce.

The forthcoming local area plan for Leixlip has scope for thousands of homes, obviously not all as a response to Intel but still a reflection of growing demand, particularly for a well-educated workforce. Bryan Little who runs the local Remax auctioneers says the company has little impact on the value of property but investment brings stability to the market.

Leixlip was essentially a rural town until the 1970s and 1980s when housing estates began to emerge to support a growing commuter population.

As it considered Ireland as its European home in the late 1980s, Intel had its eye firmly on the forthcoming Single Market and concerns about European Commission tariffs on electronic goods produced outside Europe. At that stage, Intel was producing about one fifth of the world’s computer microchips.

Confirmation of its arrival initially came with just 400 jobs, to be delivered by 1992, the faintest taste of what was to come. As well as tax incentives and infrastructure, Intel’s then vice-president Keith Thompson counted the “quality of life in Ireland” as a pull factor.

Social Democrat TD Catherine Murphy, then on the Leixlip town council, said that despite the economic climate, the area did not have huge unemployment, being a commuter belt for public sector workers.

“Mostly people were concerned about employment for their children,” she recalls. “It [Intel] was seen as an opportunity for a generation of children that wouldn’t have to emigrate.”

Visiting the site later, she says, “the one thing you noticed was that there wasn’t a grey hair in sight. That was the nature of the technology.”

Local Cllr Bernard Caldwell joined the town council a few years after Intel first set foot in Ireland. He said the sceptics – those who, in the early days worried that there might be environmental concerns – “died down” fairly quickly.

Recalling the company’s publicity campaign to lure qualified emigrants home, he says: “I don’t know of anyone who came back but, what it did, it opened up the universities; it set the groundwork for them to say, look, we need these highly qualified people to stay in Ireland.”

At Maynooth University, 10km from the Intel site, Chris van Egeraat, associate professor of economic geography, has spent years studying the company. If the latest planning permission is acted on, he says, the expansion could mean a new fabrication plant as opposed to an upgrade of the existing facility, producing the latest generation of wafer fabrication technology.

“This would safeguard the future of the Leixlip site for another 10 years,” he says. “This is probably as important as the number of new jobs being created.”

Van Egeraat says it would “remain to be seen” how many new positions would be created. In the past, similar projects have largely involved redeploying existing staff. Nevertheless, it is welcome news with the potential for further “high quality manufacturing” employment.

More broadly, he adds, Intel has played a central role in firing Ireland’s knowledge economy. It has combined in-house training with academic accreditation, opened a research and technology facility in Shannon, Co Clare, almost 20 years ago and is “embedded” in third-level institutes.

Intel’s reach into the Irish economy is deep. It has come a long way since the 1980s when Murphy first spotted cows grazing on its advance site in the sleepy Kildare countryside.

“People were saying ‘oh, we want more than cattle on that,’” she recalls. Now they have it, the question is how much more is to come.

1 Owner of Dundrum Town Centre to sell prized assets
2 Can a first-time buyer get relief on a buy-to-let home?
3 Thousands back petition demanding State aid for Aer Lingus
4 Office rentals in Dublin halved in opening six months of year due to Covid-19
5 Winner takes all is simply unsustainable, even for tech giants
Real news has value SUBSCRIBE