Alexa, please explain the dark side of artificial intelligence 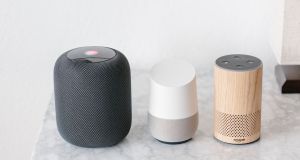 Crawford did not do what you might expect when approaching AI – namely, study algorithms, computing systems and suchlike. Instead, she teamed up with Vladan Joler, a Serbian academic, to map the supply chains, raw materials, data and labour that underpin Alexa, the AI agent that Echo’s users talk to.

It was a daunting process – so much so that Joler and Crawford admit that their map, Anatomy of an AI System, is just a first step. The results are both chilling and challenging. For what the map shows is that contemporary western society is blind to the real price of its thirst for technology.

We rely heavily on digital gadgets and often view them as miracles of disembodied progress. AI seems so sophisticated that we talk as if it is untethered from the “real” – tangible – world. But Crawford and Joler argue that nothing could be further from the truth: tech gadgets and AI cannot function without massive amounts of energy and hard-to-extract minerals, the supply of which comes at a high environmental price.

There is a hefty human cost too, paid by the army of contract workers who assist with machine learning by tagging content and parsing images

“Each small moment of convenience [with Alexa] – be it answering a question, turning on a light or playing a song – requires a vast planetary network, fuelled by the extraction of non-renewable materials, labour and data,” Crawford and Joler write. “A full accounting for these costs is almost impossible but it is increasingly important that we grasp the scale and scope if we are to understand and govern the technical infrastructures that thread through our lives.”

Other researchers are also exploring this territory. Take Mary Gray and Siddarth Suri, respectively an anthropologist and computer scientist based at a research unit of Microsoft. They have recently tried to document the lives of the “ghost workers” who play a crucial, but largely unheralded, role at tech companies such as Amazon, Facebook, Google and Microsoft by moderating content, answering queries, maintaining websites and carrying out other routine tasks.

It’s become normal to talk about the wonders of AI, while remaining oblivious to the material processes that drive it.

When we think of “tech workers”, we tend to think of high-status Silicon Valley geeks

Like Crawford and Joler, Gray and Suri found it extraordinarily difficult to undertake this study. Last month, though, they published their findings in a book, Ghost Work: How to Stop Silicon Valley from Building a New Global Underclass. The scale of what they describe is startling. So are the poor conditions that the work involves. But what is still more striking is how little we talk about these hidden millions of toilers. When we think of “tech workers”, we tend to think of high-status Silicon Valley geeks; we rarely discuss all the Indians and Filipinos who log on each day to perform functions that are vital to the smooth running of Alexa and other AI.

Why? Geography is partly to blame: rare-earth metals are mined half a world away from western consumers, in places such as Jiangxi, China, or Salar de Uyuni, Bolivia. As such, it is all too easy to overlook the environmental costs or labour conditions. Similarly, many of Gray and Suri’s ghost workers are based in parts of the developing world that are far from western eyes.

Global supply chains are so complex that even tech giants struggle to understand them. “One illustration of the difficulty of investigating and tracking the contemporary production chain process is that it took Intel more than four years to understand its supply line well enough to ensure that no tantalum [a rare metal] from the Congo was in its microprocessor products,” Crawford and Joler observe.

However, I would posit that there is another problem: culture. In some senses, it seems unsurprising that we are so blind to the exploitative patterns in modern tech. Our western consumer culture is equally blind to the grubby underbelly of global supply chains in “tangible” goods such as fashion and food. But I suspect that the seemingly disembodied nature of tech makes us doubly myopic, since we have been persuaded to think that AI almost “floats” above humans and earth.

It might be tempting to assume that the lack of transparency is a deliberate plot concocted by tech billionaires. But those Silicon Valley executives are themselves hampered by tunnel vision and blind spots. In tech (as in finance or other parts of our lives) so much is hidden in plain sight; or, at least, could be seen if only we looked.

So here are two modest proposals. First, anybody who relies on a modern cyber gadget should spend a few moments looking at that Alexa map, if only to marvel at the complexity behind the devices in our hands. Second, Alexa (and virtual assistants) should be taught to “answer” questions about that global supply chain – if asked. Yes, Amazon might hate that idea (and it is not clear how many people might actually ask). But if we had an Alexa that could answer the question: “What really enables you to operate?” that would be a small step in the right direction. Even better would be an honest answer.