Profits surge 60% at Web Summit in second year in Lisbon 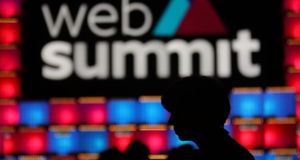 Profits continued to surge for the group that operates the Web Summit following its controversial move from Dublin to Lisbon, hitting a record high in 2017.

Newly filed accounts for Manders Terrace Ltd, the holding company behind the Web Summit and its various sister events, show pre-tax profits jumped by almost 60 per cent to €3.8 million in 2017 from €2.27 million in 2016.

The rise in profits came as turnover climbed just under 10 per cent to €28.9 million from €26.3 million. This is the first time revenues have been disclosed by the group.

The relocation of the tech conference in 2016 enabled the company to significantly grow its flagship event, with the number of registered attendees rising from fewer than 30,000 in Dublin in 2015 to 50,000 a year later in Lisbon.

The jump in attendee numbers and an increase in commercial partnerships following the move to Lisbon helped boost profits for the group as did an agreement reached with the Portuguese government to pay the event organisers €1.3 million each year to host the conference under an initial three-year deal.

The Web Summit last October agreed a deal to remain in Lisbon until at least 2028 under a €110 million deal with the government.

Mr Cosgrave, who is chief executive of Web Summit, owns an 81 per cent stake in Manders Terrace through a company called Proto Roto. Co-founders David Kelly and Daire Hickey hold just under 12 per cent and 7 per cent stakes respectively, also through corporate entities.

Mr Cosgrave announced Web Summit would be relocating from Dublin to Lisbon shortly before the 2015 event was held in the RDS.

Not long after the announcement was made, the event organisers released email correspondence between it and the then government outlining a number of reasons that made it difficult for it to remain in Dublin, including rising hotel prices and traffic management issues.

However, there was mixed reaction to the move with some critics suggesting the company’s demands were over the top.

MoneyConf, a fintech-focused event which spun out of Web Summit, relocated to Dublin from Madrid last year with Mr Cosgrave saying he intended to keep the conference in Ireland for some time. But the company announced in March it is to reintegrate it back into the flagship event.

The first speakers for this year’s Web Summit were announced at the end of April with the chief executives of Tinder, Booking. com and Hulu, among those taking part. It kicks off on November 4th in Lisbon.

1 Brexit: System agreed for Irish goods to skip checks on UK trade
2 High Court appoints interim examiner to Compu b parent company
3 How much do Irish people earn? And what will Covid-19 do to our wages?
4 David McCullagh announced as co-host of RTÉ Six One News
5 Ireland faces 'deep downturn' this year and may not rebound until 2024 if there is a second wave
Real news has value SUBSCRIBE