Revenue from Dell’s servers unit, its second largest business, fell about 8.8% to $4.18 bn 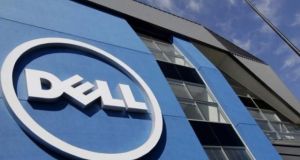 Dell’s total net revenue rose 2.6 per cent to $21.91 billion in the three months ended May 3rd

Dell Technologies, which employs 6,000 people across Dell, VMWare and Pivotal in the Republic, reported lower-than-expected revenue in the first quarter as its server business declined for the first time in 10 quarters amid economic conditions weighing on demand in China.

Revenue from Dell’s servers unit, its second largest business, fell about 8.8 per cent to $4.18 billion in the first quarter. Revenue in the Infrastructure Solutions Group, host to the server business, fell 5 per cent to $8.20 billion, missing analysts’ estimates of $8.94 billion, according to FactSet.

Trade tensions have been dragging on demand across various industries in China, and tech heavyweights such as Intel and Texas Instruments have spoken cautiously about it.

“Clearly the US-China trade tensions are a bit of overhang on the (servers) business,” Dell’s chief financial officer, Thomas Sweet, told investors in a post-earnings call.

“The server business saw this dynamic of a bit softer market coupled with some very large opportunities that were extraordinarily price aggressive,” Mr Sweet told Reuters.

Dell has been planning for a potential fourth list of tariffs on Chinese products that could include notebooks and monitors, and will adjust its global supply chain as needed.

Dell’s total net revenue rose 2.6 per cent to $21.91 billion in the three months ended May 3rd. On an adjusted basis, revenue of $21.99 billion missed analysts’ average expectation of $22.24 billion, according to IBES data from Refinitiv.

“Dell felt the impact from softness in the server market while also favouring profitability over revenue in China and some larger opportunities that became too price sensitive,” Mark Cash, an analyst at MorningStar, said.

Dell swung to a profit in the quarter, reporting net income attributable to the company of $293 million, compared with a loss of $636 million a year earlier.

Excluding certain items, Dell’s earnings were $1.45 per share in the quarter, beating Wall Street’s expectations of $1.21.

The server business also overshadowed a 13 per cent jump in revenue from commercial customers, which was largely due to Microsoft’s decision to end support for Windows 7 in early 2020.

Separately, Dell’s VMware unit reported a 13 per cent jump in revenue to $2.28 billion.